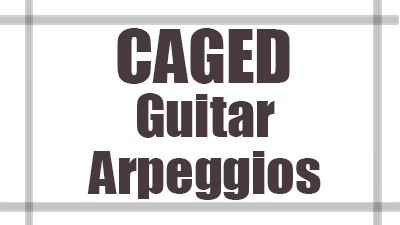 Arpeggios are the backbone of jazz improvisations, they are easy to learn and play. They are very popular in all styles of music (rock, metal, blues, pop) because they allow to easily outline the harmony and create fluid lines.

It is very important to understand what are arpeggios and how to use them into your jazz guitar solos. This guitar lesson provides the most important arpeggio shapes that any beginner jazz guitarist must know.

In the first part, they are classified into seven qualities : major 7, minor 7, dominant 7, half-diminished, diminished 7, Major 7#5 and minMaj7 using the CAGED system, one of the best methods for learning scales and chords on the whole of guitar neck.

The second part of the lesson shows the arpeggios within the main families of scales namely, major (diatonic), harmonic minor, melodic minor and harmonic major.

►What is a Guitar Arpeggio?

►What is CAGED Method?

There are two definitions of an arpeggio in guitar. The first meaning (also called Broken chords) is the technique employed to play one by one the notes of an open chord as a fingerpicking player would do.

The second explanation is what interests jazz guitar players. It involves playing the notes of chord to create effective lines and nice improvised solos over a specific chord progression (II V I, turnarounds, backdoor, blues) or a jazz standard.

What Are the Main Types of Arpeggios?

There are different types of arpeggios, they can be minor, major, dominant, diminished, augmented.

What is the Difference Between a Scale and an Arpeggio?

How Many Notes are There in an Arpeggio?

An arpeggio can be made of three (triad), four (tetrad), five, six or seven notes.

Why Learning Arpeggios is Important?

Arpeggios are very important tools for improvising over jazz tunes and chord changes. They easily outline the harmony, they help to create more melodic guitar solos. They allow to go straight to the point.

What is CAGED System?

The CAGED system is a technique that allows guitar players to understand and visualize chord shapes, scales and arpeggios on the entire guitar neck. The five letters of the word CAGED represent five important chord shapes (C major, A Major, G Major, E major, D major) that will serve as the basis and that all beginner guitar players know.

Guitarist Joe Pass used this technique to learn and teach jazz guitar. It is one of the reason why the CAGED method is employed by many guitar teachers and for the guitar charts of this lesson. 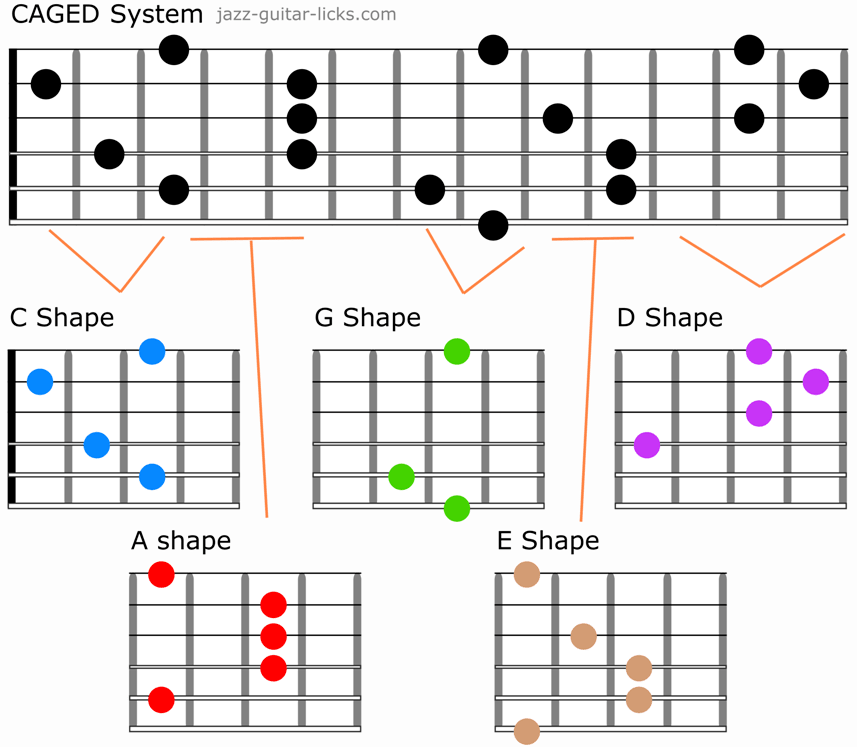 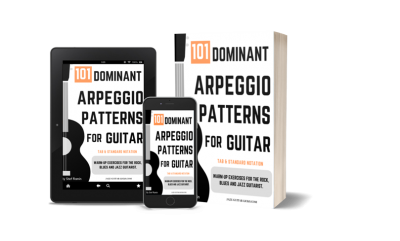 Major 7 arpeggios are built with root (1), major third (3), perfect fifth (5) and major seventh (7). You can see in the guitar charts below the shape (in G) covering the entire guitar neck. Then you see five major 7 arpeggio shapes and their CAGED forms in brown (E shape), purple (D shape), blue (C shape), red (A shape) and green (G shape).

They can be found in the following scales:

The last graphic shows the related major scales with the major 7 arpeggio form inside. 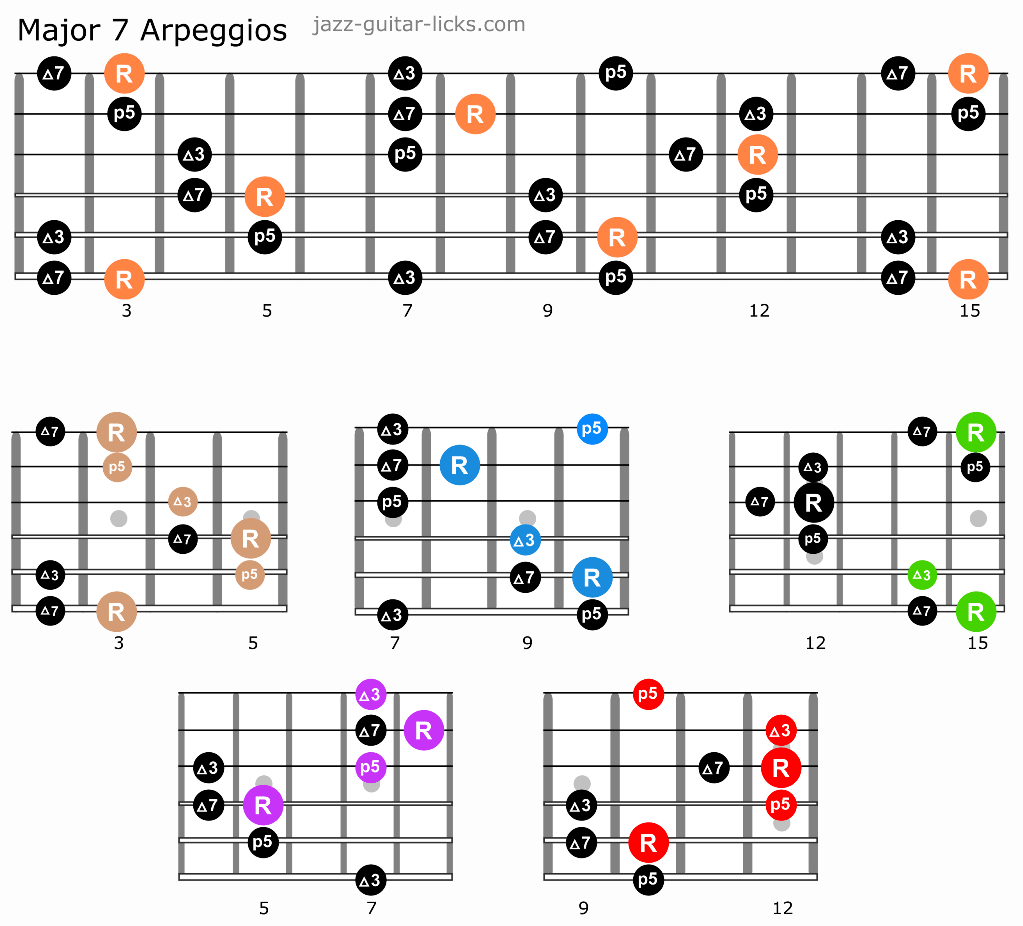 Here are five CAGED positions for minor 7 Arpeggios and the related scales. Min7 arpeggios are built with root (1), minor third (b3), perfect fifth (5) and minor seventh (b7).

You can find minor 7 arpeggios into the modes below : 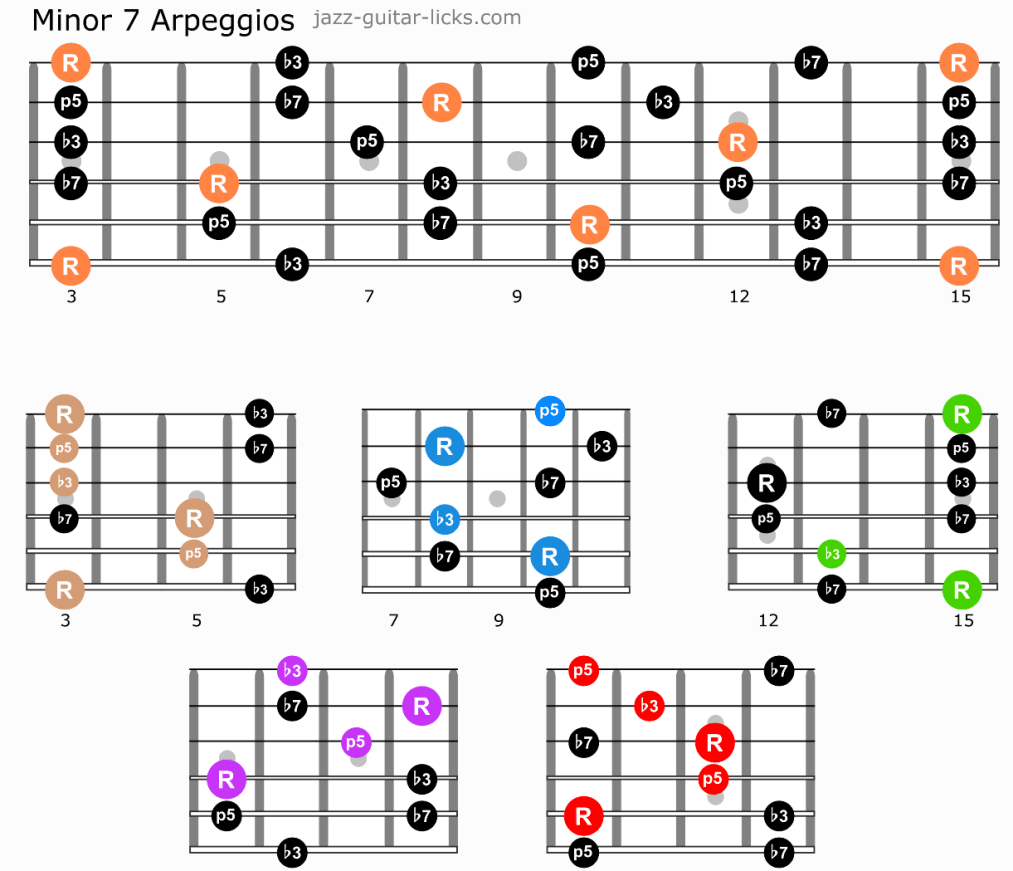 Dominant 7 arpeggios are made of root (1), major third (3), perfect fifth (5) and minor seventh (b7). They can be found in the five dominant scales listed below : 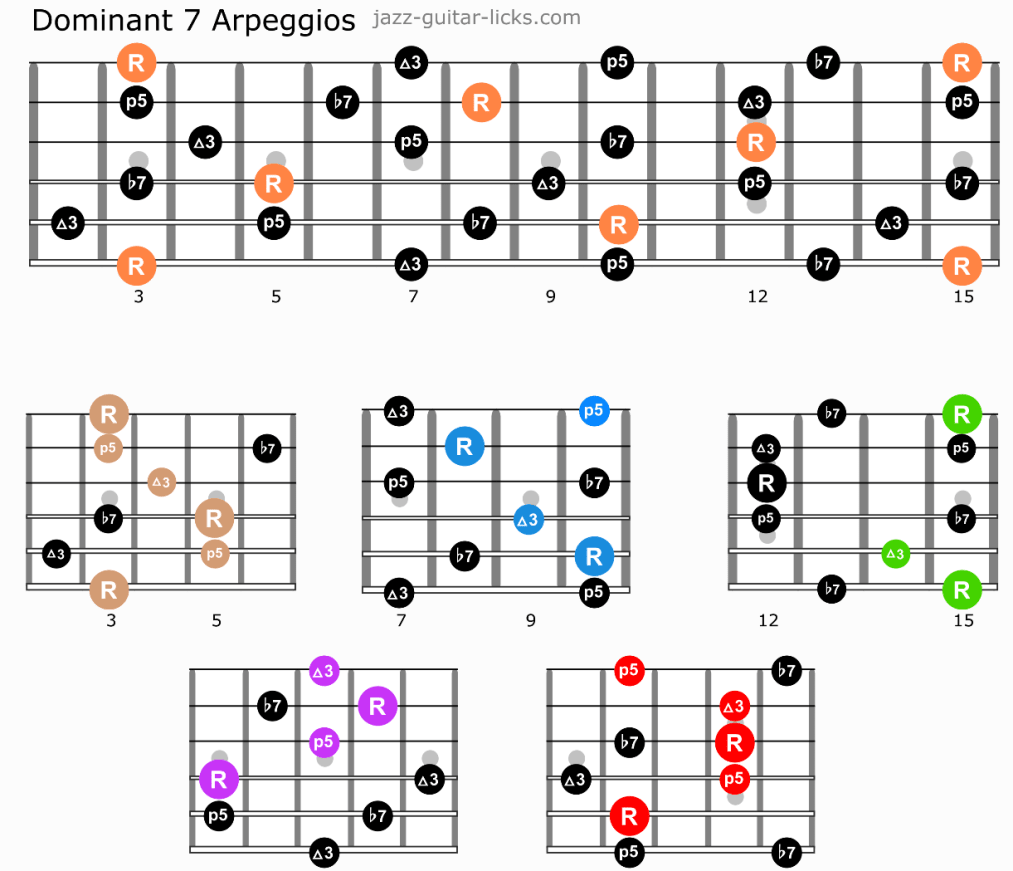 Half-diminsihed Arpeggios (m7b5) are built with root (1), minor third (b3), diminished fifth (b5) and minor seventh (b7). They are present into the following modes below : 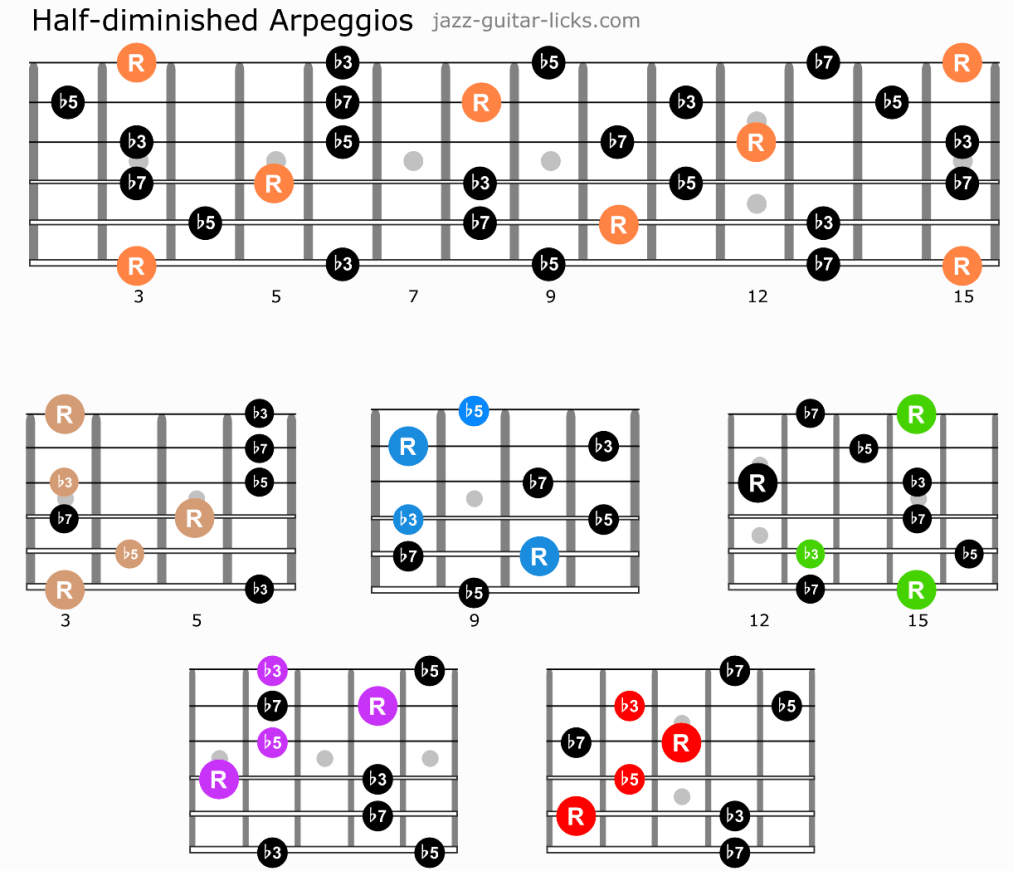 Diminished Arpeggios are made of root (1), minor third (b3), diminished fifth (b5) and diminished seventh (bb7). They are symmetric because they are built with minor third intervals. It means that there are four different chords in one position. That's why the guitar charts below belongs to four different keys Gdim7, Bbdim7, Dbdim7 and Edim7.

Here are the scales containing a diminished arpeggio : 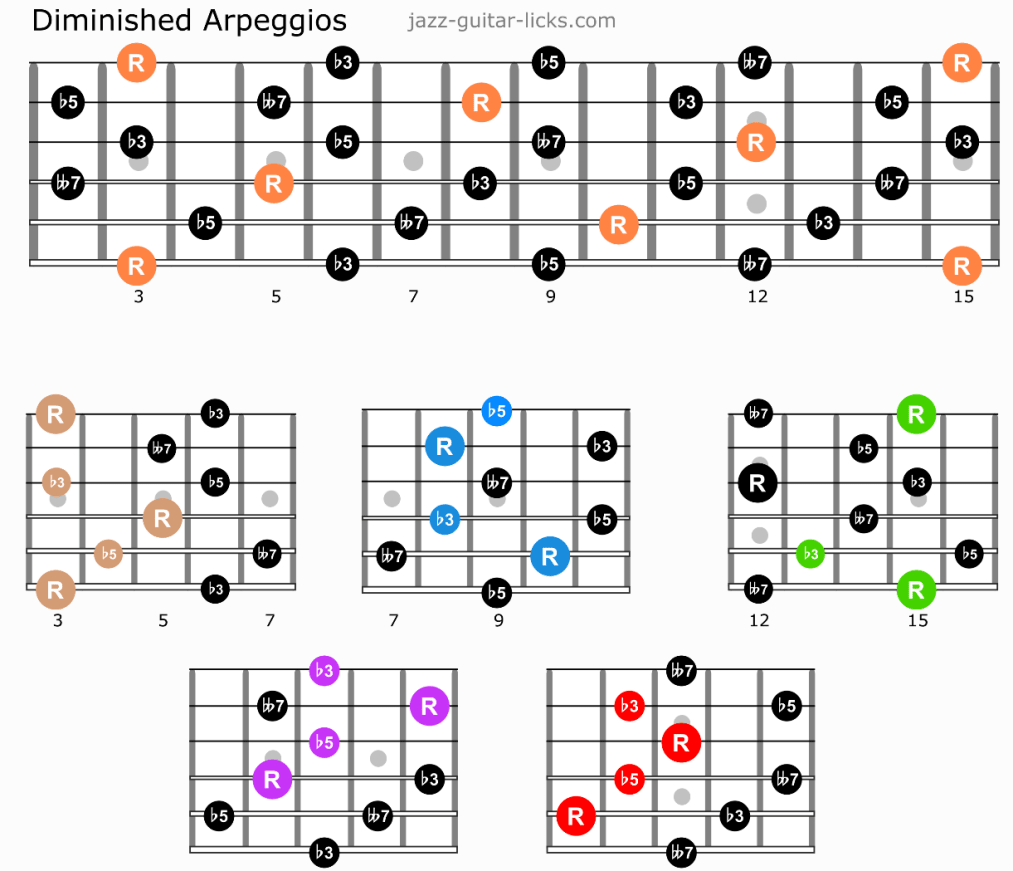 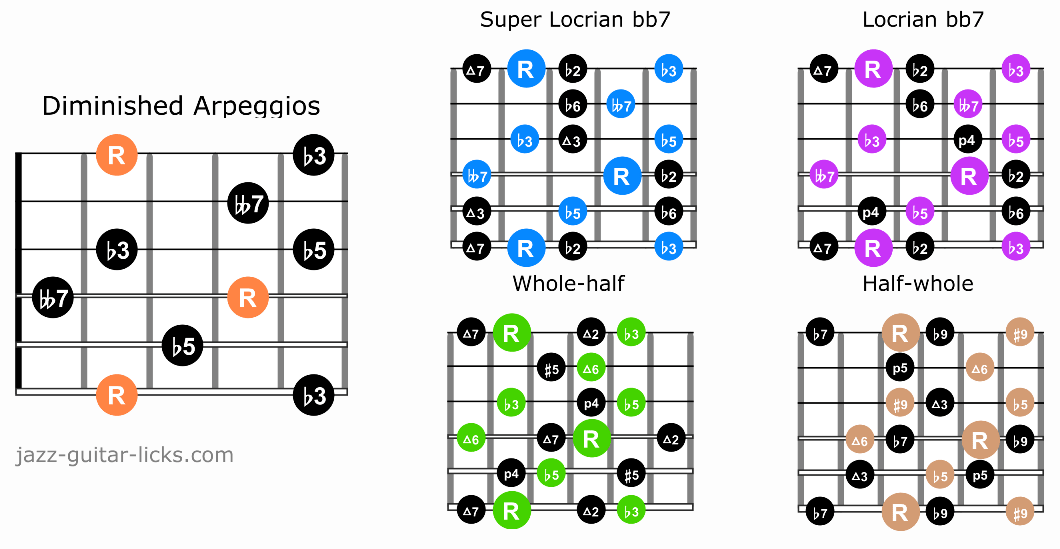 Major 7#5 Arpeggios are constructed with root (1), major third (3), augmented fifth (#5) and major seventh (7). Here are the modes that contains an augmented arpeggio : 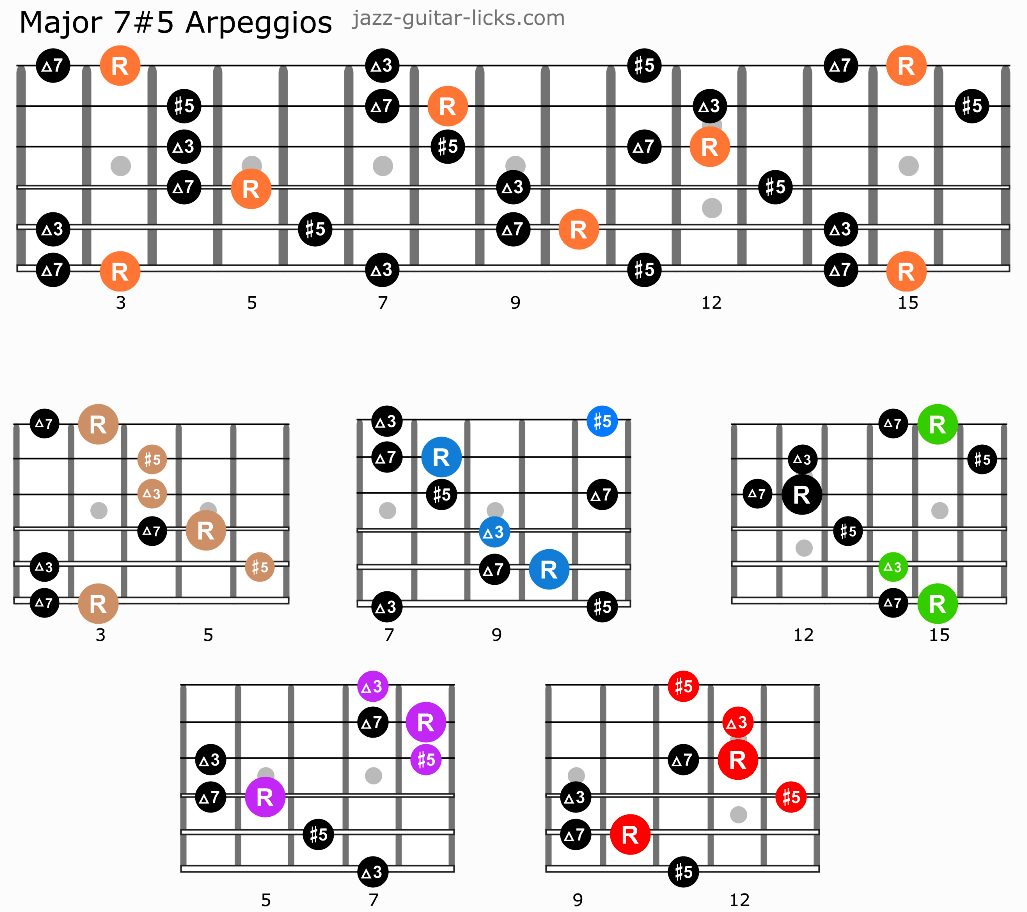 Minor/Major 7 Arpeggios are built with root (1), major third (b3), augmented fifth (5) and minor seventh (b7). You can find them in three modes 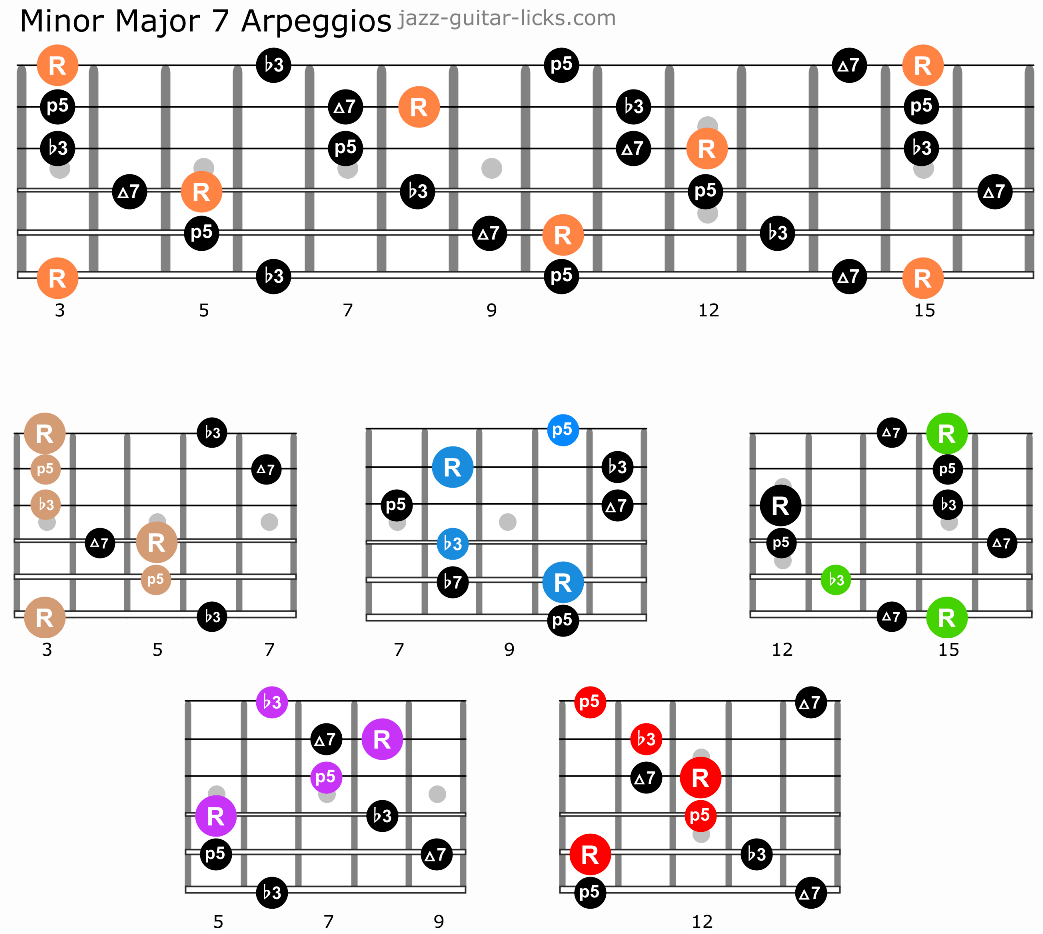 When harmonizing each note of the major scale in thirds we obtain seven diatonic arpeggios divided into four categories :

The first and fourth degrees are major. The second, third and sixth degrees are minor, the fifth degree is dominant and the seventh is half-diminished. 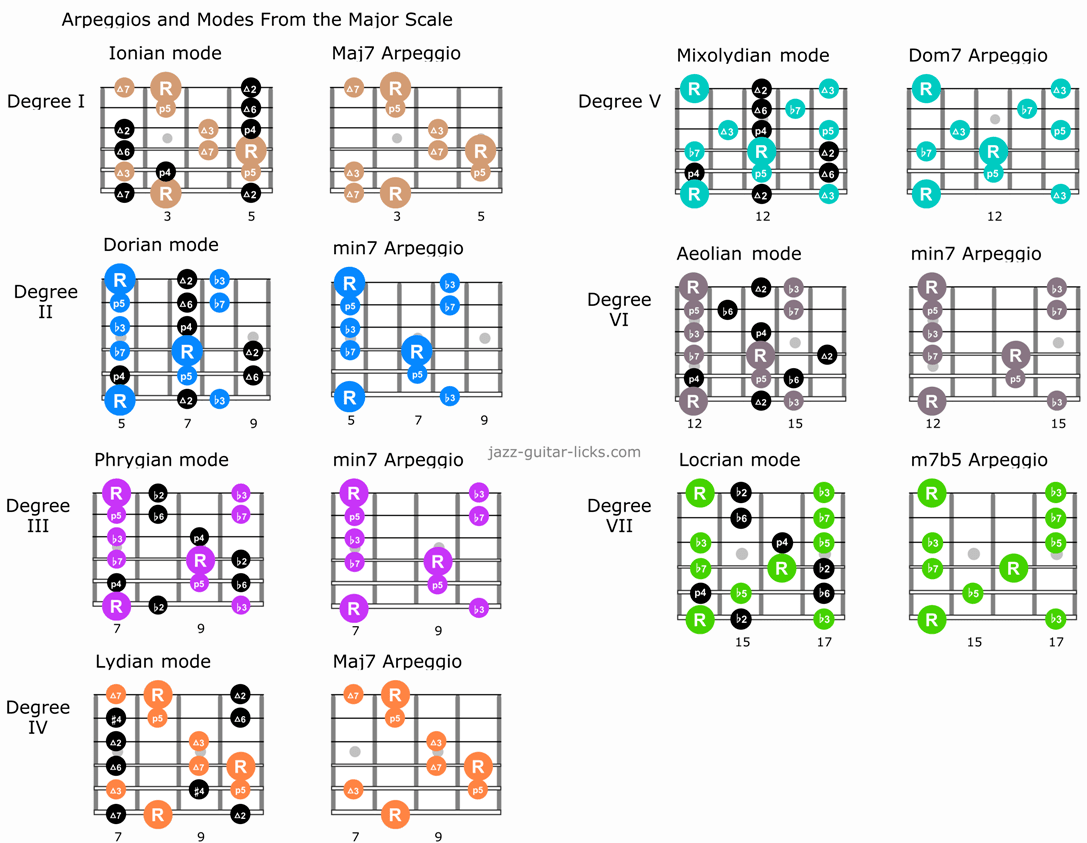 Just as the major scale, the harmonic minor scale harmonized in thirds produces seven qualities of arpeggios as shown in the guitar tab below :

The exercise below show the arpeggios in the C harmonic minor scale, it is quite obvious that you must play them in all twelve keys.

The fourteen guitar diagrams below show the modes of the harmonic minor scale and their related arpeggios. Please note that the fingerings are suggested, don't hesitate to experiment you own and play these shapes in all twelve keys all over the guitar neck. 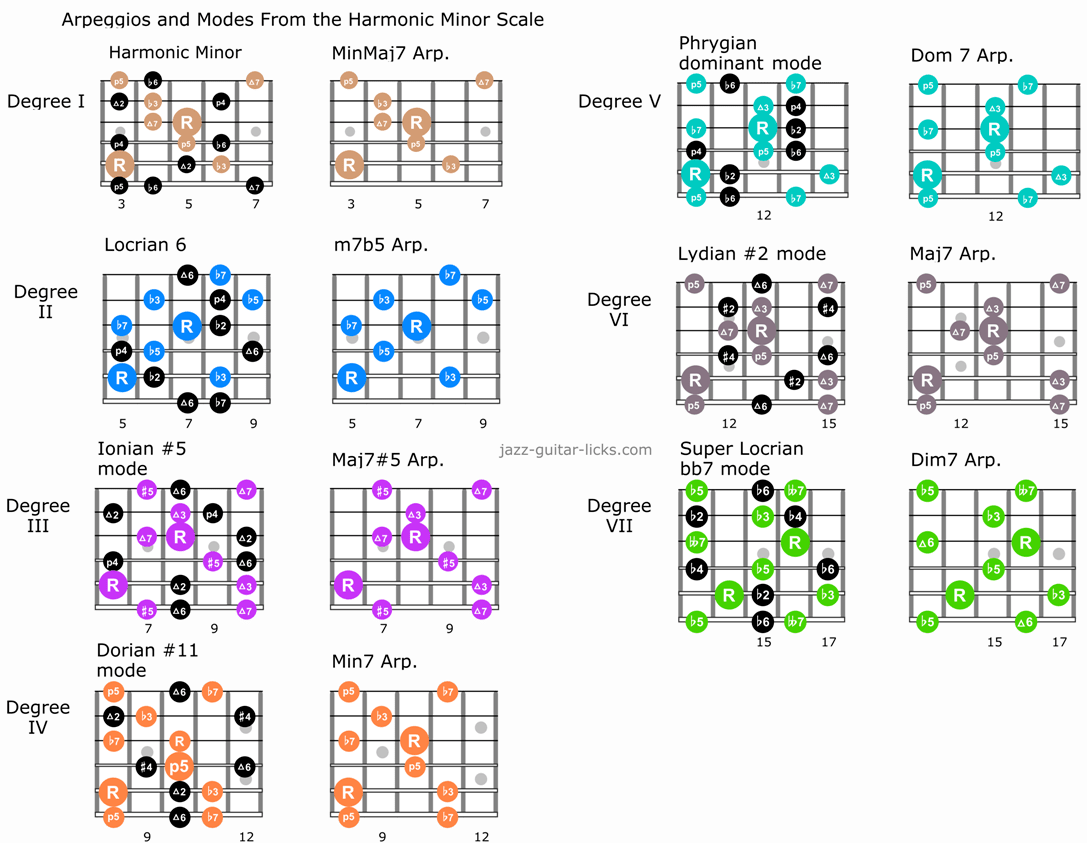 By Refering to the guitar tab below you see that there are only one minor Major 7 arpeggio, one minor 7, one major 7#5, two dominant 7 and two m7b5 arpeggios. Once again the fingerings are suggested as well as the tonality which is C minor here.

There are seven modes in the melodic minor scale, the following guitar charts explain the correspondence between them and the five types of arpeggios. 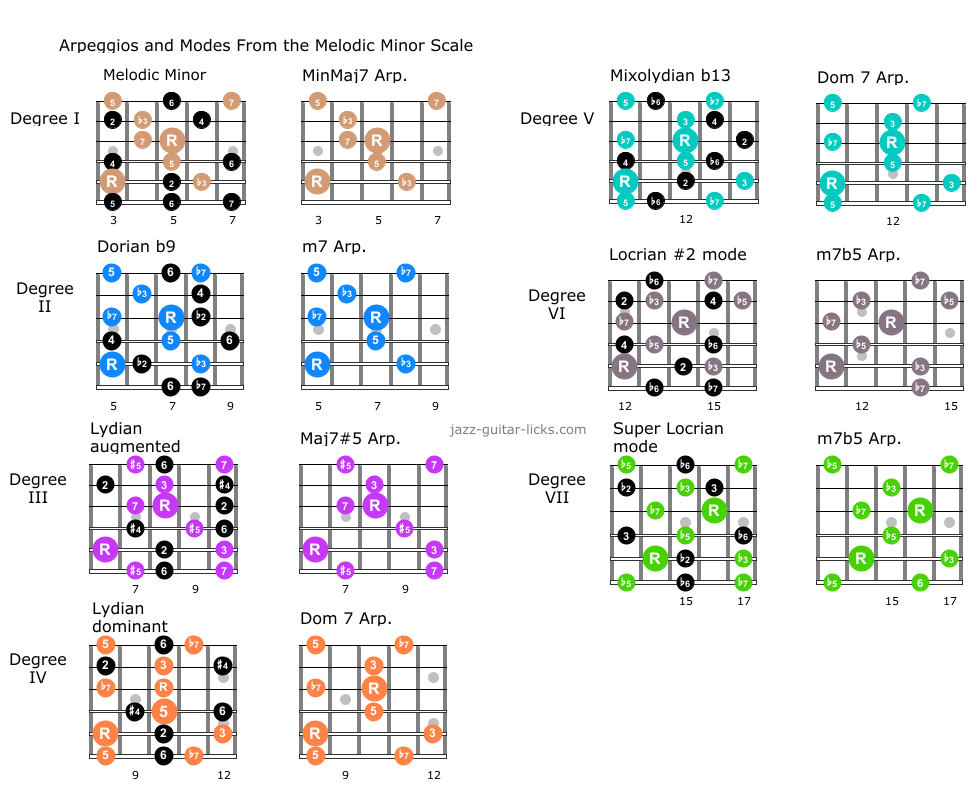 Arpeggios of The Harmonic Major Scale

Relationships Between Modes and Arpeggios of The Harmonic Major Scale

There are seven mode in the harmonic major scale, here they are represented through seven guitar diagrams and their related arpeggio shapes. 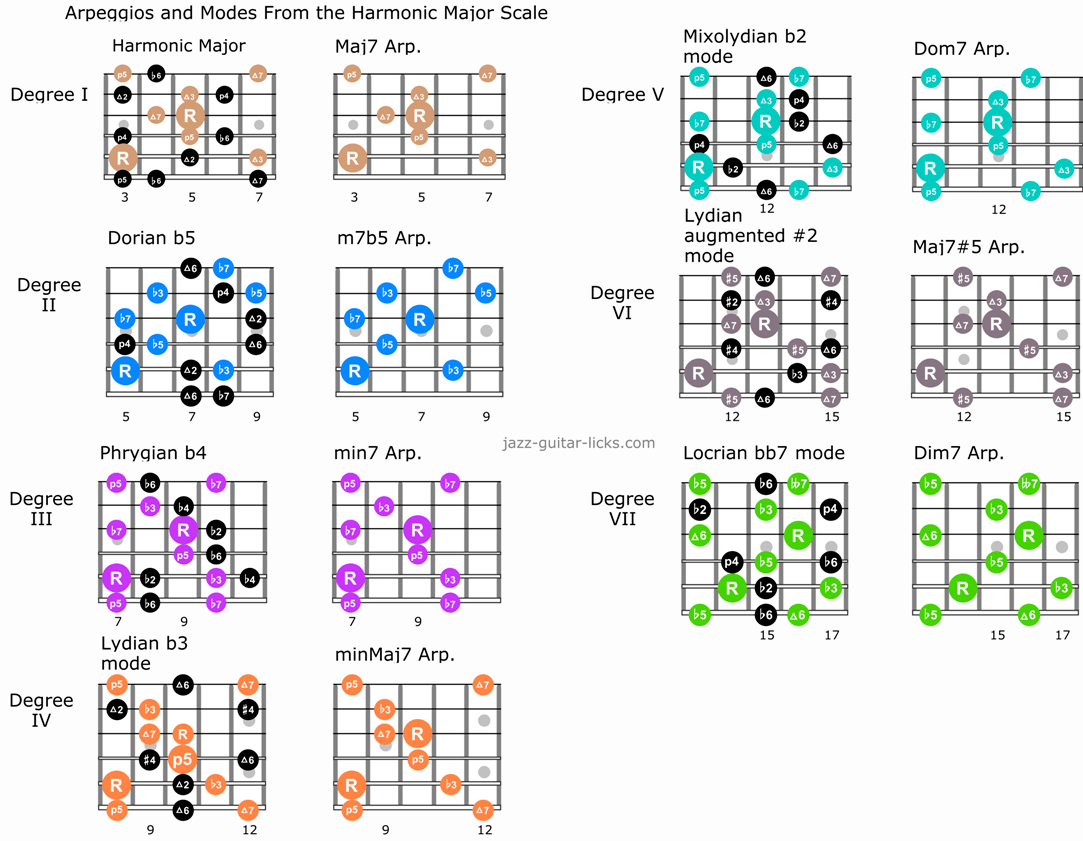