What's a Dominant 7b5 Chord

The dominant seventh flat five chord (7b5) is a dominant seventh chord with a fifth lowered by a semitone. It is built with a root (1), a major third (3), a diminished fifth (b5) and a minor seventh (b7).

The dominant b5 chord is an extremely important sound in jazz music due to its dissonant and unresolved sound.

Dominant seventh sharp eleventh chord symbols (7#11) arise often in big band charts and standard tunes. But in theory, these two chords are completely different. Dominant 7b5 chords imply only 4 notes, unlike 7#11 chords are made up of 6 notes. However, all the 7b5 diagrams shown below can serve as dominant 7#11, but the ninth and the perfect fifth will be omitted.

How to Play 7b5 Chords on Guitar? 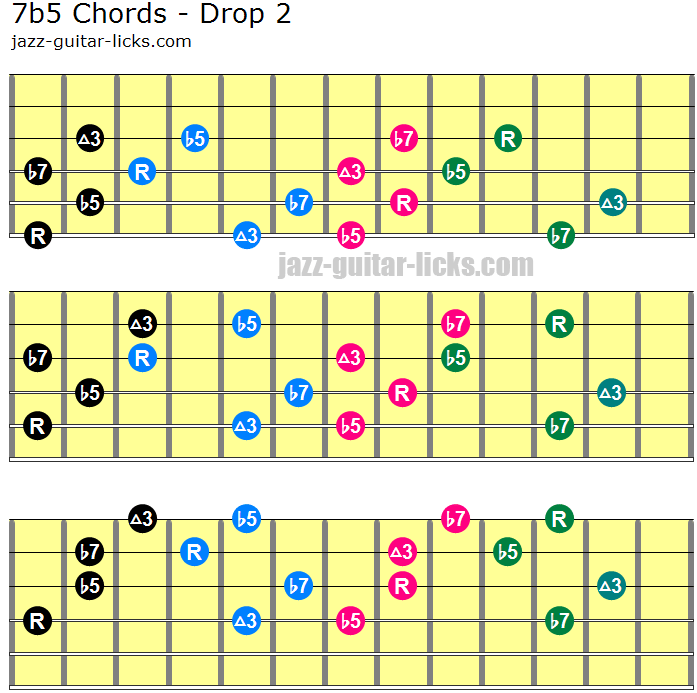 Drop 3 voicing is the process of taking the third highest note of a close voicing and dropping it an octave. This way you obtain a new voicing (R b7 3 b5) that you can inverse in three different ways :

This four drop 3 voicings provide four 7b5 chord positions as shown in the diagrams below. 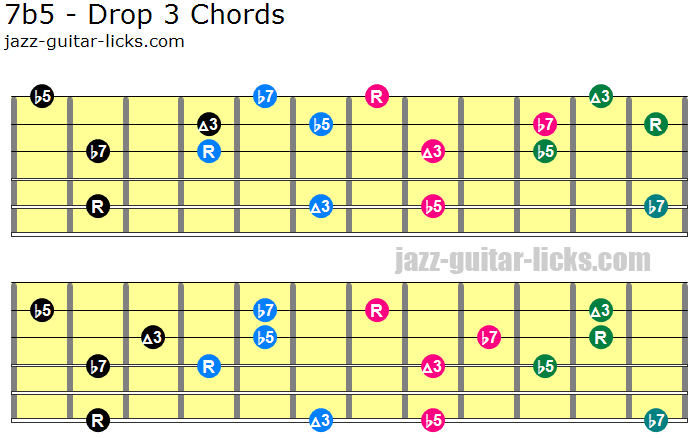 7b5 chords are often used in jazz standards, giving a distinct sound flavor.Try to substituting ordinary dominant 7th chords with 7b5 chords in your favorite songs.

A common chord substitution found in jazz is where the V of a II V I sequence is replaced by a dominant 7th chord whose root is a tritone below. Here is a first example with Dm7 | G7 | Cmaj7.  Db7 can be in place of the G7, thus giving Dm7 | Db7 | Cmaj7.

This is a great sound because with this kind of substitution, the root of the V chord is chromatic. We get a bass line descending by half steps (D to Db to C).

This kind of downward trajectory produces a pull towards the tonic chord. It is often a nice and featured sound in jazz. Now that is where the 7b5 chord comes into play. Indeed, you can play it instead of the Db7. In other words, you just have to lower the fifth by a semitone, giving Dm7 | Db7b5 | Cmaj7. This way the b5 of Db7b5 (G) is none other than the V of Cmaj7.

Another example using drop 3 chords, in the key of Bb with a chromatic descending bass line (C, B and Bb).