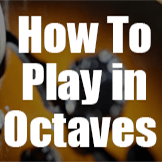 Octave playing is a big part of jazz guitar language, this technique has been popularized by guitarist Wes Montgomery one of the greatest improvisers and jazz genious of all times.

Theoretically, the principle is quite easy to understand. You just have to play lines using two simultaneaous notes separated by twelve semitones. In practice, it is more difficult because of the fingerings.

Indeed, you have to move two fingers at the same time while keeping the same hand position. This lesson provides guitar diagrams and easy guitar lines for a good mastery of this technique.

► Range of a Guitar

► How To Find Octaves

► How to Play Octaves

An octave relates to the number 8, it is made of 12 semitones. It is the name of the interval between the first note and the eighth note of a heptatonic scale.

What is The Range of a Guitar?

The range of a standard tuned guitar (E-A-D-G-B-E). Each pitch is identified by a system named Octave Identification System or Scientific Pitch Notation.

The principe is that each pitch is labeled with a number. This system is generally used by piano players. For example, the lowest C note of a piano is labeled C1 whereas the highest note is named C8.

It works the same with guitars. As shown in the shapes below the lowest E is E3 and the highest E is E6. 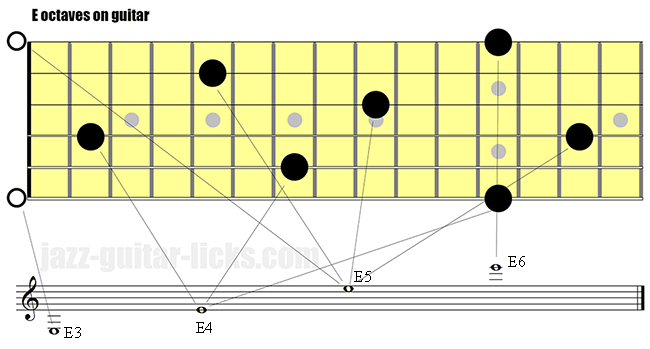 Why Learning Octaves Is Important?

Locate octaves on your guitar neck will help you learn much easier scales and chords. This way you will learn in-depth you guitar fretboard and you will be able to transpose any scales, melodies and chords.

How To Find Octaves On Guitar?

Any guitar player should be able to find easily the notes across the neck. You will reach that point by learning the octaves shapes below. Each shape below shows an octave, the two notes in the diagram share the same name.

In other words, one note is higher or lower than the other. This way you can find the name of any note on the entire guitar neck.

For example, if you take the first diagram and place a finger on the 6th string at the fifth fret you get an A. So, the note on the fourth string is the same note an octave higher.

The second shape produces exactly the same notes, but the highest note is on the third string instead of the fourth.

The lowest root on the third and fourth diagrams is on the fifth string, the highest on the third on second string. All these notes have the same name.

Here are two other ways of playing an octave. The two forms have the lowest note on the third string and the highest on the second or first string.

The only option to play an octave with the lowest note on the third string is represented by the diagram 7. How To Play Octaves?

The most common way to play octaves on guitar is to use the diagrams 1, 3, 4 and 7 previously seen. The most effective execution of octave playing technique is to play the two notes simultaneously using the first finger and the little finger of the left hand (or right hand if you are left-hande) on the following string sets : 6 and 4, 5 and 3, 4 and 2, 3 and 1.

You can eventually use the third finger in place of the pinky finger to play the highest note of the octave. Wes Montgomery wich is considered the best representative user of octave playing technique used to strike the string with his thumb, but you can of course use a pick.

You can now try to play octaves starting on each tone of diatonic arpeggios. The arpeggios used are built from the G major scale: This YouTube video provides 10 easy octave patterns in D minor. These lines in the style of Wes Montgomery are mostly based on the Dorian mode and the minor blues scale.

Once you're comfortable with these lines, try to play them in 12 keys and try to apply them to your favorite changes.

Another video providing ten easy dominant patterns to play over a Bb7 chord. Once again try to transpose them in twelve keys.

Here is an easy octave line to play over a classic II V I sequence in C major.

This guitar line is transcribed from an Emily Remler solo, it is taken from the PDF eBook "49 Essential Jazz Guitar Lines".

It contains of a repetitive pattern built with the 5 (F), b7 (Ab) and root (Bb) of Bb7. You can play it over the first four bars of a Bb jazz blues tune.

Lastly, to conclude this lesson let's take one of the 10 jazz blues tunes that every guitarist should know. Blue Monk is a 12-bar blues in Bb composed by the great pianist Thelonious Monk.

The tune is characterized by the use of four-note chromatic scales in bars 1,2,4 and 5. Blue Monk is an interesting variation of the basic blues progression. There is a IV chord (Eb7) in the second measure and a diminished seventh chord (E°7) in measure 6. 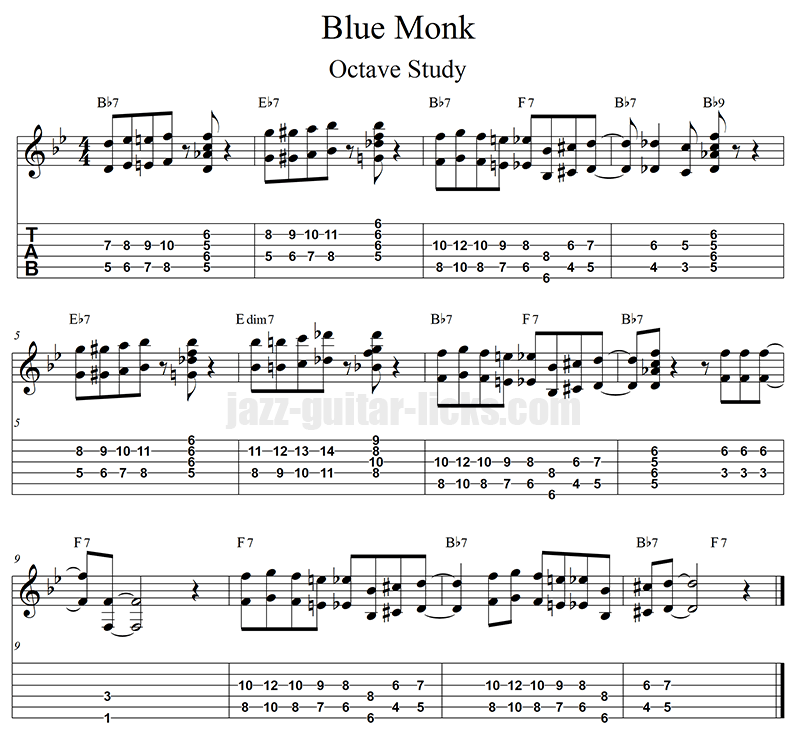