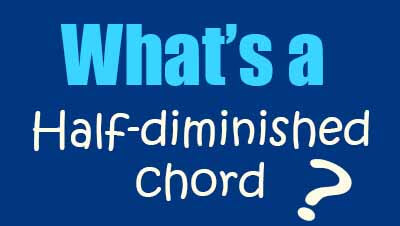 This guitar lesson explains what is m7b5 chord, how to play it on guitar and how to apply it in common harmonic contexts as major and minor II-V-I progressions.

What is a Half-diminished Chord?

As is it shown in the chart below, the half-diminished chord is built with a root (1), a minor third (b3), a flat fifth (b5) and a minor 7th (b7). The diminished 7th chord has a diminished 7th instead of the minor seventh. This is the only difference between these two chords.

When you harmonize in thirds the degree VII of the major scale you obtain a m7b5 chord.

When you harmonize in thirds the degree II of the harmonic minor scale you get a m7b5 chord.

When you harmonize in thirds the degrees VI and VII of the major scale you obtain two m7b5 chords.

Here are the three main m7b5 guitar chord shapes. The first one is drop 3 voiced whereas the two other voicings are drop 2.

How to use the half-diminished chord

The m7b5 chord can be found in different contexts and is used in different substitutions. For example, when playing a minor II V I progression, the 2nd degree is a m7b5.

The half-diminished chord is specially a leading chord, the sound strongly pulls towards resolution. It is possible to use it as a diatonic substitution for a dominant 7th chord. Try to play the m7b5 a major 3rd higher than the dominant 7 chord to replace it. For example, use Bm7b5 for G7.

You can use the m7b5 as a substitution for a minor 7th chord, built from a minor third below. Meaning that you can replace Dm7 chord with Bm7b5.

The minor seventh flat five chord is also an inversion of the minor 6 chord. This is a minor 6 chord with the sixth in the bass. Here is a comparison between them.

As you see in the guitar neck diagrams below, the minor 6 and m7b5 chord shapes are exactly the same. 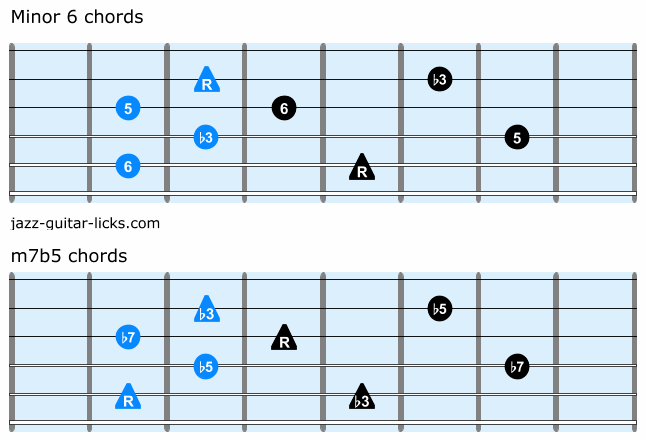