What is a Major 9th Arpeggio?

As its name implies there is a major ninth (9) added to the major 7th arpeggio, thus giving root (R), major third (3), perfect fifth (5), major seventh (7) and ninth (9). Major 9th arpeggios have the same notes as the chords they are derived from.

A major ninth (9) is a compound interval made up of an octave plus a second (14 semitones). It is an octave larger than a second. It brings specific color considered as dissonant. It should not be confused with the minor ninth (b9) which is spanning 13 semitones (a minor second plus an octave).

What's the Difference Between Major add 9 and Major 9 Arpeggio?

How To Play Major 9th Arpeggios On Guitar

Here are four guitar shapes to play major 9th arpeggios. The roots (R) of the first diagram are on the sixth, fourth and first string. The second has roots on the second and fifth string.

The two other shapes are designed to be played up and across the neck (diagonal playing, shifting required, 2-3 notes on each string). There are of course many ways to play these arpeggios on the guitar, but if it is the first time that you learn them, it is recommended working on a few positions. 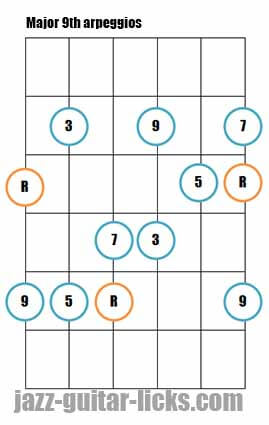 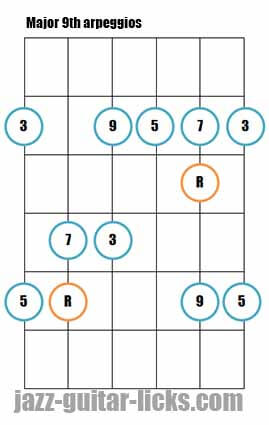 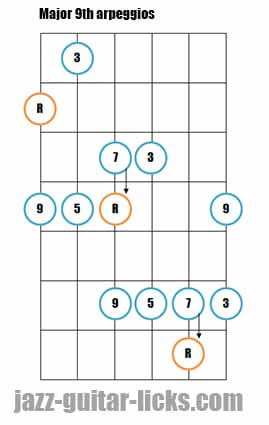 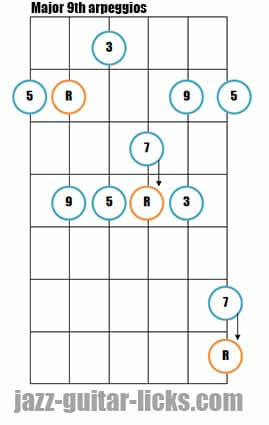 What Are Superimposed Arpeggios?

You may notice that a major 9th arpeggio contains a minor 7th arpeggio starting on the third. The min7 arpeggio is superimposed with the maj7 arpeggio.

The example below shows the Em7 arpeggio (E-G-B-D) into the Cmaj9 arpeggio (C-E-G-B-D). Playing an Em7 arpeggio over Cmaj7 chord makes it sound like a Cmaj9.

How to Use Arpeggios Over II V I Chord Progressions?

The most common chord progression in jazz music is the II-V-I. The next two easy examples show you how to apply arpeggios over a C major II-V-I sequence. You will simply play a D minor 7 arpeggio (or a D minor triad) over Dm7, a G dominant 7 arpeggio over G7 and an Em7 arpeggio over Cmaj7.