What Are Sus4 Chords ?

Suspended fourth chords are neither major nor minor because the third (that determines the chord quality) is replaced by the fourth, giving the formula :

The fourth and the fifth create tension so sus4 chords have to resolve. That’s why they are generally combined with a parent major or minor chord, even if sometimes they can also last without resolving.

Comparison With Other Chords

What is the Difference Between Major and Minor Chord?

If we take the C minor chord for example, we have C (root), Eb (minor third) and G (perfect fifth). A C major chord will be built with a root (C), a major third (E) and a perfect fifth (G).

Suspended 4th chords can be confused with dominant eleventh chords. Dom11 chords are built with 6 notes, including an eleventh (11) which can be considered as the fourth (4).

The difference is that a dominant 11 chord contains a major third (3), a minor seventh (b7), a ninth (9) and an eleventh (11). There are six tones for the 11th chord and three tones for the suspended fourth chord.

There can also be confusion between sus4 and 7sus4 chords. The difference is simple. Dominant suspended 4th chords have a minor seventh (b7).

What is a Closed Chord?

Closed chord means no chord tones lie between any two adjacent notes. All the notes are close together as possible.

How to Play Sus4 Chords on Guitar?

Here are four guitar diagrams including three voicing shapes to play suspended fourth chords in closed position on the guitar. The blue shape is the root position, the green is the first inversion and the orange form is the second inversion.

What is an Open Voicing?

Contrary to closed voicings, the tones of open voicings are spread out over more than one octave. Thus, giving new chord positions as shown in the three guitar neck diagrams below. 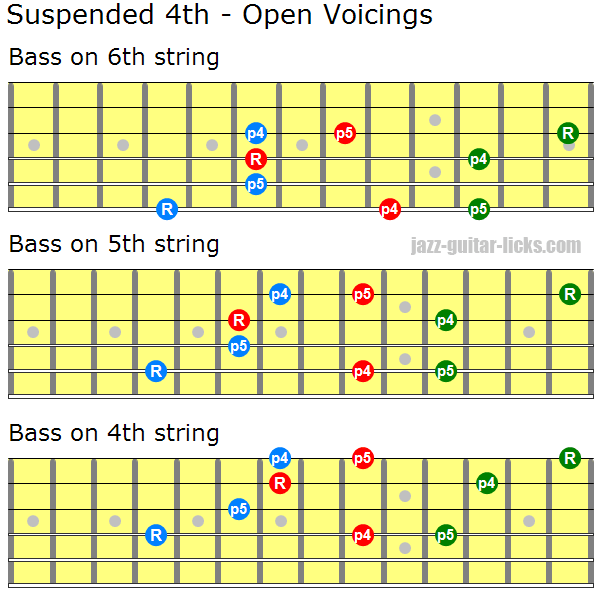