How Are Built Minor Seventh Arpeggios?

How To Play Minor 7 Arpeggios on Guitar?

The basic way of learning min7 arpeggios is to visualize them in one octave. The four guitar charts show how they look.

The first chart has roots on the sixth and fourth string. The second diagram has root notes on the fifth and third string, etc.

Since the root (the orange note) gives its name to the arpeggio, to play a Gm7 arpeggio using the first diagram (the one with the lowest root on the sixth string) you will need to place your index finger at the third string.

You have to play them in all twelve keys. 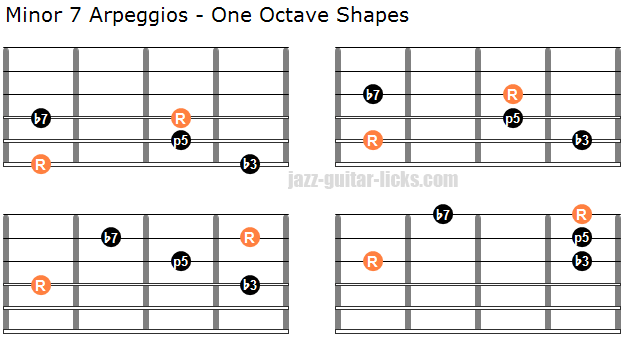 The two following diagrams show how to play minor 7 arpeggios within the space of two octaves in order to cover the sixth strings on the guitar without shifting.

Once again it is very important to play these arpeggio shapes in twelve keys all over the guitar neck. It is also recommended to experiment you own fingerings.

Another more complex way of learning minor seventh arpeggios on guitar is to use what we call the CAGED system. It is to visualize arpeggios on the basis of very popular open chords that are C, A, G, E and D. This method is used to have a comprehensive view of the whole guitar neck.

The first shape (the bigest) show how looks a Gm7 arpeggio all over the neck, from the third fret to the fifteenth fret. The five other diagrams contain a Gmin7 arpeggio position based on one of the five basic CAGED shapes. 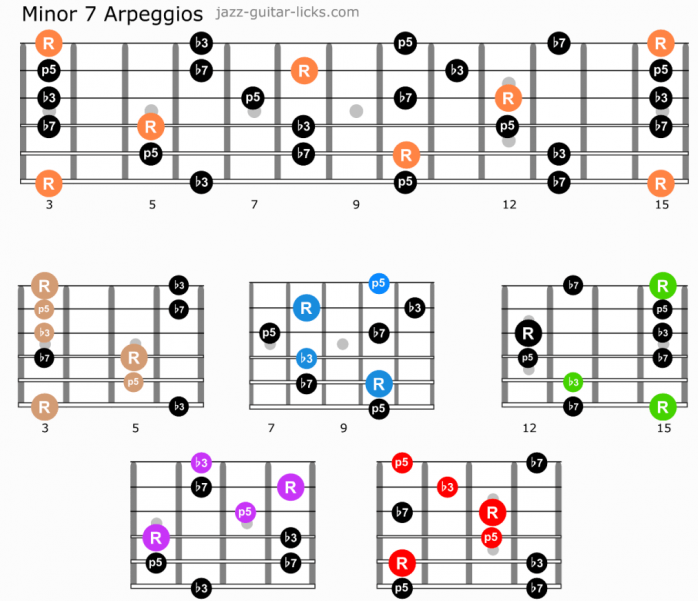 How to Extend min7 Arpeggios?

To add the ninth to your minor 7 arpeggio you have to play E, to add the eleventh just add G and to add the thirteenth you must play B, it is simple. You can apply this technique to any minor seventh arpeggio.

The guitar tab below show the upper-structure of a Dmin7 arpeggio. You can also notice that is made of four superimposed arppegios that are: How to Connect Arpeggios and Chords?

One of the most important trick to master in jazz is to associate arpeggios and chords. For this you will find three basic minor 7 chord shapes (Drop 2 voicings) and four exercises. The idea is to play the arpeggio and its chord and vice versa.

As shown in the following guitar charts, min7 arpeggios are present in six modes taken from four families of musical scales :

How to Apply min7 Arpeggios?