What Are 6th Chords?

Sixth chords are built with four notes. They consist of a root (1), a major third (3), a perfect fifth (5) and major sixth (6). This means to add the sixth note of the major scale to a major triad. For example, a major triad is made up of three stacked notes, (C, E and G). To get a C6 chord you just have to add the sixth of C which is A.

Here are two basic major sixth guitar chord shapes in C. These positions are movable, meaning that you can play them anywhere on the guitar neck. 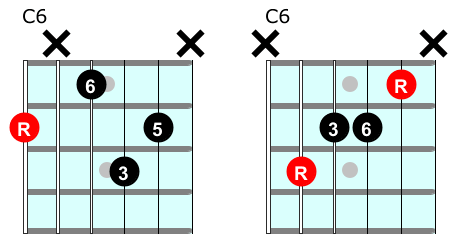 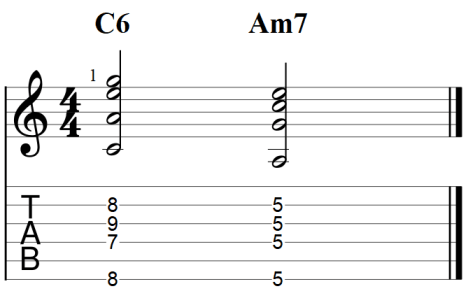 Sixth chords are built by lowering the 7th of any major 7 chord position. The following guitar diagrams are based on drop 2 major 7th chord voicing shapes. The 7th is lowered by 2 semitones thus giving 4 voicings.

Drop 2 chords are built by dropping the second highest note of a four-note chord in close position to the lowest note of the chord. These chords are the most easy to play because all the notes on the guitar neck are close together. There is no string skip.

How to Play Sixth Chords on Guitar?

The three diagrams below show how to play Drop 2 sixth chords on guitar :

Drop 3 chords are built by taking the third note from the top of a four-note chord in closed position and putting it to the bass. Four new voicings arise from this, here they are :