What Are Major Seventh Chords ?

Jazz harmony is (traditionally) founded on chords constructed in thirds. Let's take a C major seventh chord. It is made up of C, E, G and B. 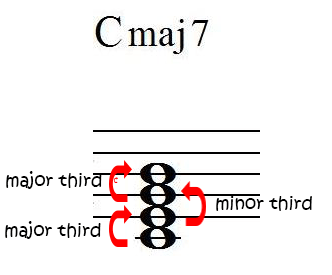 As it is shown below you can see that the C major 7 chord has an additional note (the seventh) in comparison with the basic major chord.

There are several different ways of writing the same chord or scale sound. It is often complicated for a jazz student to become familiar with all the nomenclatures for writing chords. The most used symbols for major seventh chords (example in C) are CM7, C? and maj7. What Are Drop 2 Chords ?

Drop 2 chords are the most popular chord voicings used in jazz guitar and are very important devices for comping or building chord melodies.

What is an Inverted Chord ?

The root of an inverted chord is not in the bass. It means that the notes of a chord are inverted. As you can see in the guitar diagrams above, there can be a third, a fifth or a seventh in the bass.

Here are the four drop 2 major seventh chord voicings (The term "voicings" refers to the order of notes in a chord).

The three diagrams below include all the drop 2 chords and inversions in connection with the previous chart.

Each voicing is represented by a color, demonstrating at the same time the relationship between the four major seventh chord positions on the whole guitar neck.

What Are Drop 3 Chords ?

That's what the four drop 3 chords look like on the guitar neck.

What Are Drop 2-4 Voicings

Drop 2 & 4 chords are built by moving the second and fourth note of a close position an octave down. Thus giving a new voicing R-3-5-7 which will serve as a basis for three other voicings (inversions).

How to Extend Major Seventh Chords?

Major seventh chords can be extended with extra notes to add flavour to your playing. These added notes are the ninth (9), eleventh (11) and thirteenth (13). Here are some basic shapes. 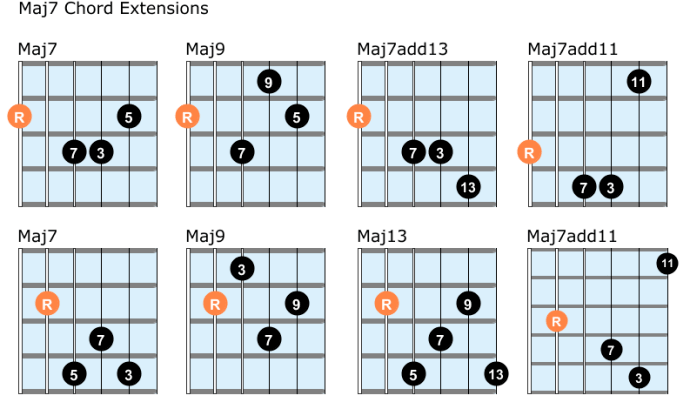 Here are two easy examples that illustrates how a to play a major seventh chord in a major 2 5 1 progression. The first exercise contains a drop 2 major 7 chord in root position with the bass on the fourth string.

The second tab contains a drop major 7 chord in root position with the bass on the fifth string.