Triads are a combination of three notes built in thirds. They are generally the first chords to learn for the beginner guitarist. Learning and playing triads on all over the guitar fretboard will expand your musical knowledge and comping skills.

What Are The Four Main Types of Triad?

How to Build a Major Triad?

Major triads are basically built by stacking the root, the major third and the perfect fifth of the major scale. As you can see in the chart below, the C major triad is made up of C (root), E (major third) and G (perfect fifth).

An inverted chord is a chord whose notes are arranged so that a note other than the root is in the lowest voice. In other words, the notes of the chord are in a different order.

In the following diagrams you will find four root positions related to the third, fourth, fifth and sixth strings. Each root position occurs two inverted chords with the third or the fifth in the bass. That gives 12 closed positions for one chord.

What is a Closed Chord?

Closed guitar chords are those where the root and the inverted positions, fit within the space of one octave. You have to practice and master these twelve positions in twelve keys. You also have to be able to name each chord that you play.

The four guitar diagrams below show you how to play close voiced major triads with basses on the 6th, 5th, 4th and 3rd string. 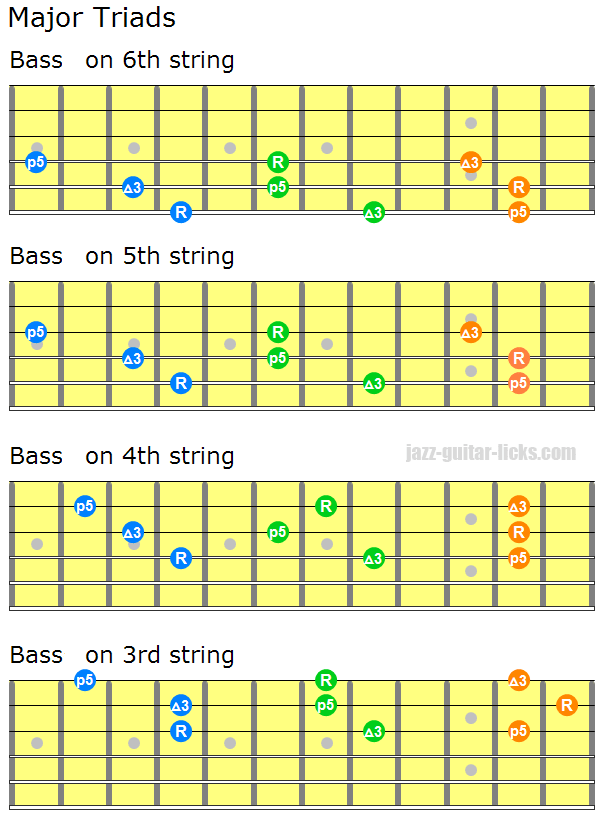 What Are Open Voiced Triads?

Since major triads are built with 3 notes, it is possible to drop the second highest note (the middle note) of a major close voiced triad up an octave to produce what will call a drop 2 voicing referred to as open voiced triad. It is a very much appreciated technique by composers and arrangers.

This concept can be applied to any chords as minor, major, diminished and augmented. The chart below show you three major open voiced triads in connection with the three guitar diagrams below.

Let's take an example with a close C major chord. It is built with a root (C), a third (E) and a fifth (G). By dropping the second highest note (E) up an octave, we obtain a new sequence of notes : C, G and E respectively the root, the fifth and the third. This is a C major open voiced triad chord. Bar 1

In bar 2 the second highest note of the first inversion of C major is dropped up an octave. That gives E (third), C (root) and G (fifth), referred to as an open C major chord third in the bass (C/E).

As you can see in bar 3 , the second highest note of the second inversion of C major is dropped. Thus giving G (fifth), E (third) and C (root). This is a C major open voiced triad with the fifth in the bass. (C/G). 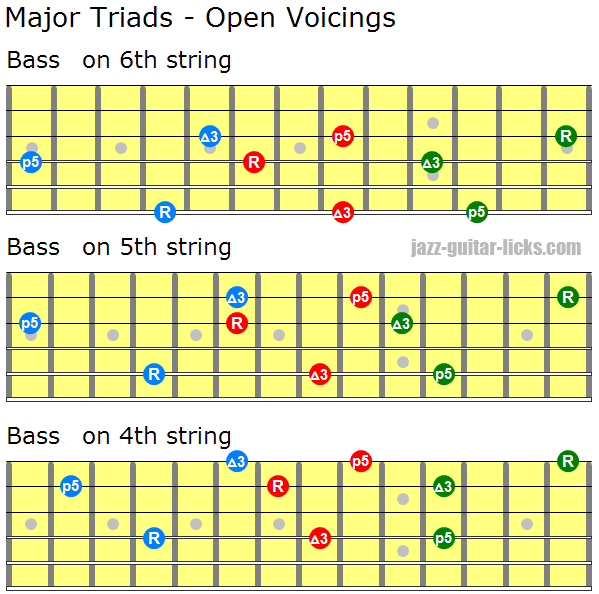 Relation Between Chords and Major Triads

The chart below show what notes are highlighted when a major triad is played over a specific degree of a given chord. Example with the first row of the table : when playing a a major triad starting on the second of C major (D) we highlight the 9, #11 and 13 of C.