Minor triads are constructed by stacking the root, the major third and the perfect fifth of a minor scale.  As it is shown in the chart below, an A minor triad is made up of A (root), C (minor third) and E (perfect fifth). In comparison with the major triad chords, the third is lowered by a semitone.

Before starting exploring minor triad chords, you have to know that an inverted chord is a chord whose notes are arranged in a different order. That means that the bass can be the third or the fifth instead of the usual root note, thus giving different voicings.

What Are The Four Main Types of Triads?

The four types of triads are :

You will find below 4 guitar diagrams containing 12 minor triad chord shapes in closed position. Remember that close voiced chords are those where the root position, and all inversions, fit within the space of one octave.

The interval structures for close voiced triads are : 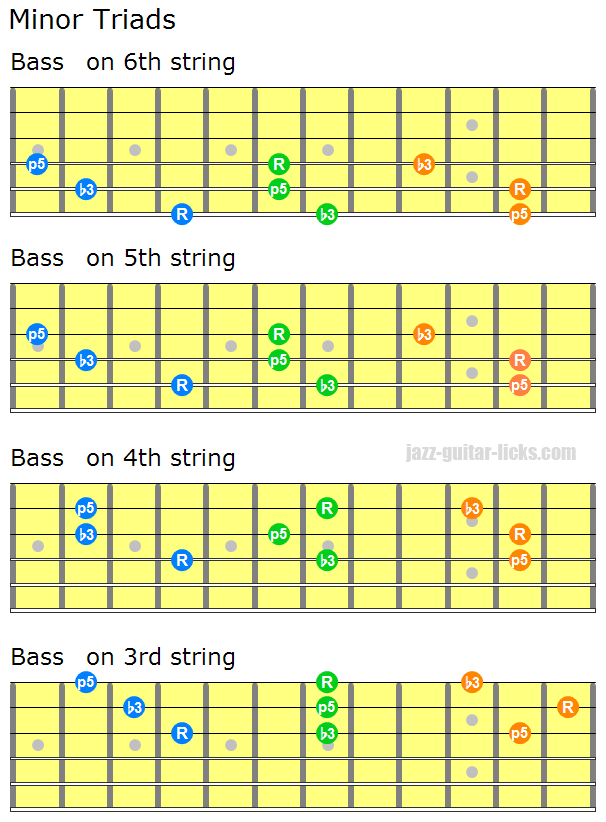 As it is explained previously, minor triads are built with 3 notes. A root (1), a minor third (b3) and a perfect fifth. There can be open or closed voiced triads whatever they are (minor, major, diminished and augmented). Open voiced triads provide a great way to expand your chord vocabulary. They are very useful for comping, composing or chord melody.

What is An Open Voiced Triad?

An open voiced triad is built by moving the middle note of a closed voicing up on octave.

Let's take an example with a C minor triad (close voicing). It is built with C, the root, Eb the minor third and G, the fifth. To build a open voicing, you have to move the middle note that is Eb an octave up. This way you get a new voicing : C (Root), G (fifth), Eb (minor third). Now you can repeat this operation with the two inverted closed minor triads to obtain two other open minor triad voicings.

What's The Difference Between Closed And Open Triads?

CLOSED VOICINGS : The notes are as close together as possible, all included in one octave.

OPEN VOICINGS : The notes are spread over more than an octave.

Here are three guitar diagrams each containing three open minor triad shapes. The root chord R 5 b3 is in blue. The first inversion b3 R 5 is in red and the second inversion 5 b3 R is in green. 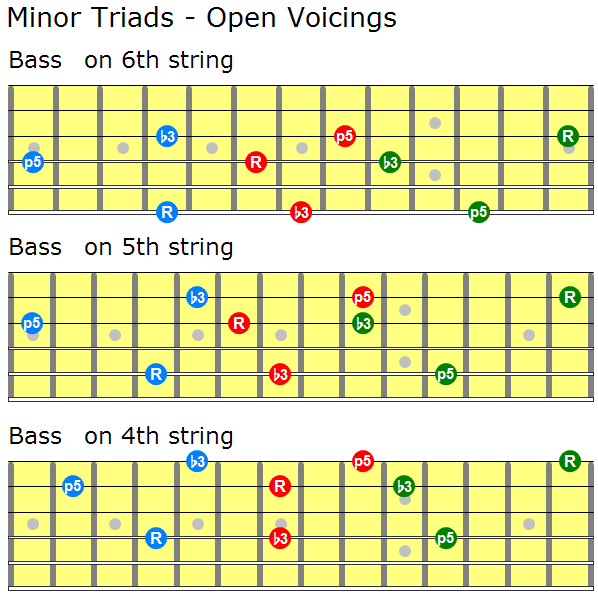 What is The Triad Pairs Technique?

Minor triads can be used by pairs, this is what we call "the triad pairs technique". It's a simple principle employed by many jazz improvisers. The basic used is to take two adjacent minor triads from the diatonic scale that are the ii and iii degrees, e.g with the C major scale.

As you can see the C major scale (just as all the scales) contains three minor chord types related to the second, third and sixth degrees. Only two triads are adjacent, Dm and Em, the second and third degree.

The triad pairs system consists in playing these two triads over any diatonic chord. In this way you highlight some chord tones as explains below. 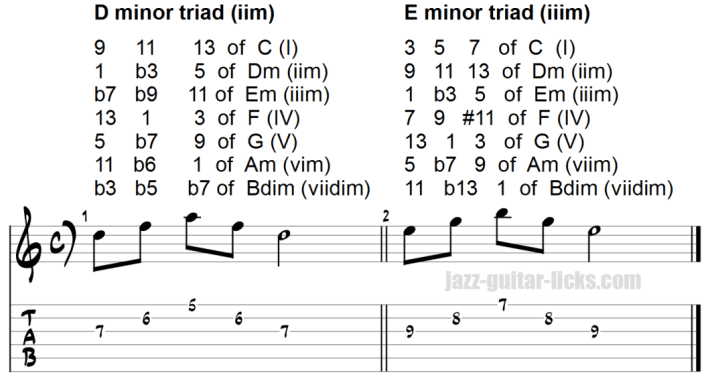 The examples below show how to practice minor triads using the triad pairs system.

Here is an easy example of use of diatonic minor triad pairs over the iim7 chord of a classic 2 5 1 sequence.