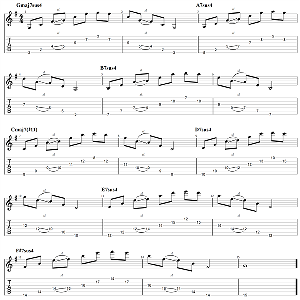 Quartal harmony is the way of building chords with intervals of fourths instead of thirds, it's a nice way to modernize and enrich your jazz guitar playing. This post provides an easy exercise for a first approach of quartal playing that is to arpeggiate three-note chords built in fourths, starting on each step of a major scale.

As is the case in many lessons on the website, you'll find a short YouTube video and the link to download the PDF for free, a little further in this article.

The basic principle is to stack three notes starting on each step of the G major scale (G - A - B - C - D - E - F#). Each note being a fourth away from the previous. In other words, this is the way to harmonize the major scale in fourths.