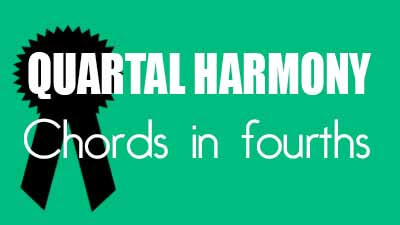 What is Quartal Harmony?

To enrich and modernize the harmonization of a piece it is common to use fourth chords. They can replace some original chords to bring more melodic freedom into improvisation and more tension in harmony.

Since the late 1950s, harmony in fourths has played a very important role in the development of modern jazz. Musicians and composers have used a lot the quartal harmony.

Among them, the great American pianist McCoy Tyner, who, is a master in the art of playing quartal chords. Mike Stern, Herbie Hancock, Chick Corea, Bill Evans and Kurt Rosewinkel have also used this technique.

In this lesson with tabs and shapes, we will see how to build chords in fourths, how to harmonize the major scale with and how to use them in comping.

► How To Build Chords In Fourths

► Adding The Third "So What Chord"

How to Build Chords in Fourths ?

Basically, chords are built by stacking thirds. If you don't master this fundamental theoretical element, it is, therefore preferable to go to see the lesson about how to harmonize the major scale in thirds

An interval is the distance between two notes. There are two kinds of fourth intervals :

A fourth chord, also called quartal chord, is a chord built with fourth intervals. There can be three types of fourths chords :

Building a three-note chord built in fourths in its pure form is quite easy. Starting  from the fundamental, you just have to stack notes separated by intervals of perfect fourths. Example with C.

When stacking these three notes, we obtain a three-note chord built in fourths C-F-Bb.

Here are the fourth chord voicings and their respective guitar diagrams with basses on 6th, 5th, 4th and 3rd strings. 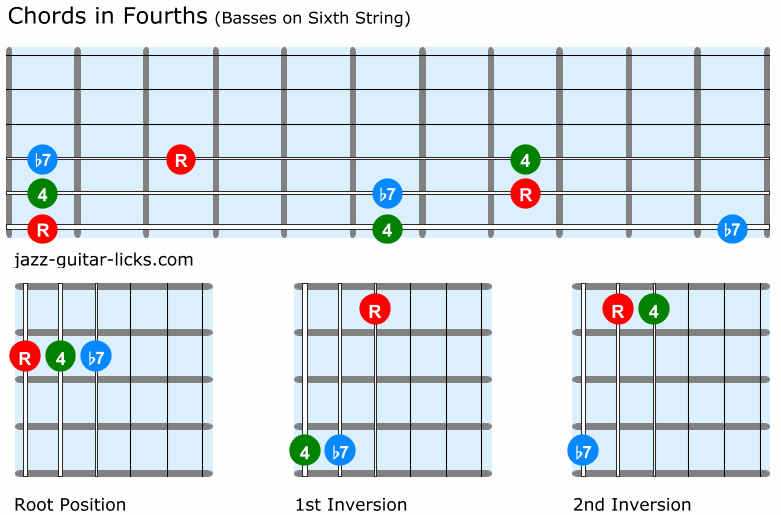 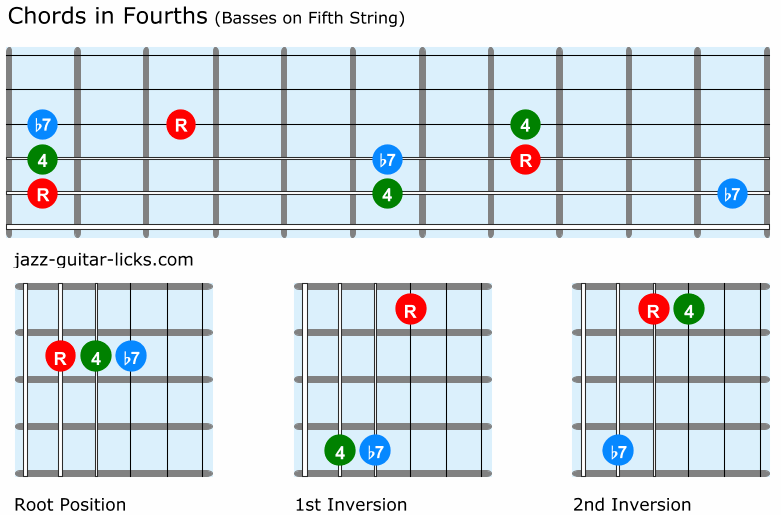 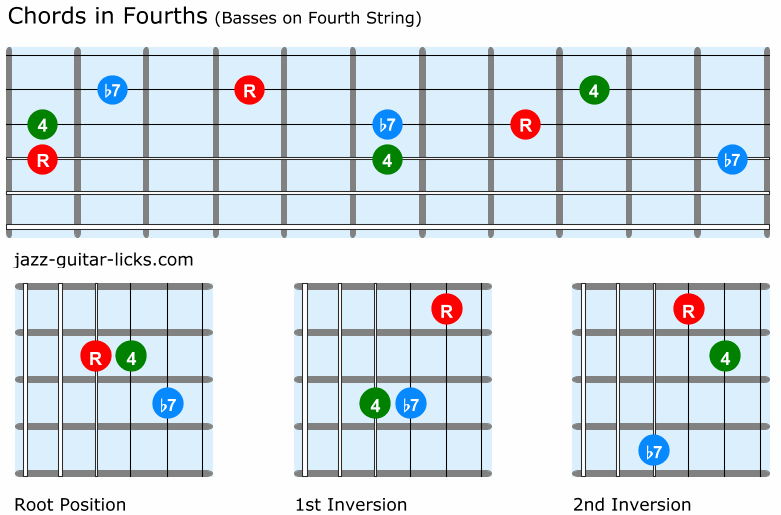 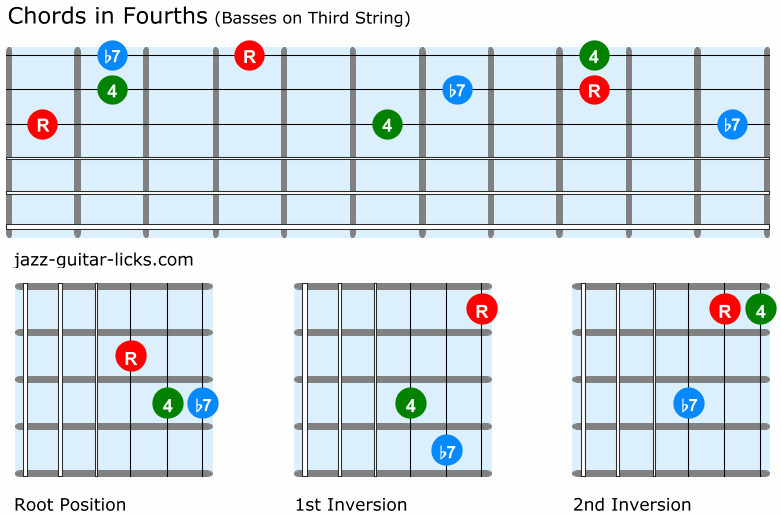 How to Harmonize the Diatonic Major Scale in Fourths?

All the chords from the harmonized major scale are made up of perfect fourths (4th + 4th). Except for the I and IV degrees because of the harmonization, are respectively built with 4th + aug4th  and aug4th + 4th.

That implies 8 other fourth chord positions that all have two possible inversions:

Fourth chords made of 4th + aug4th

These four positions are related to the degree I of the major scale. They are built by stacking a perfect fourth and an augmented fourth. 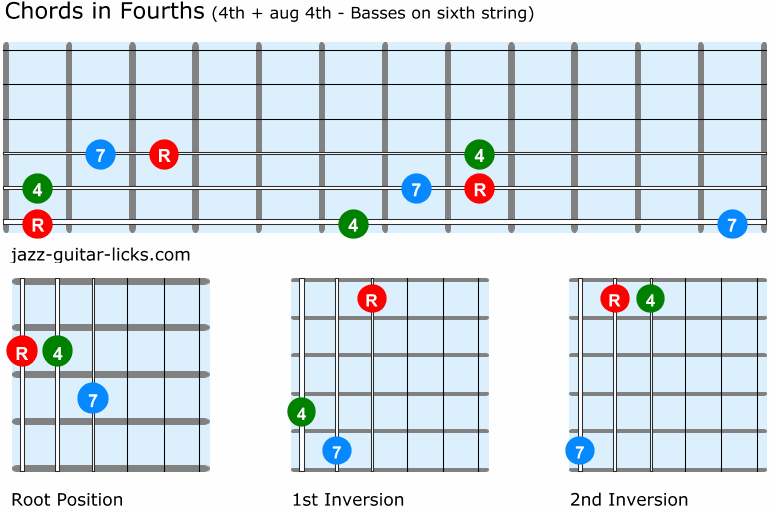 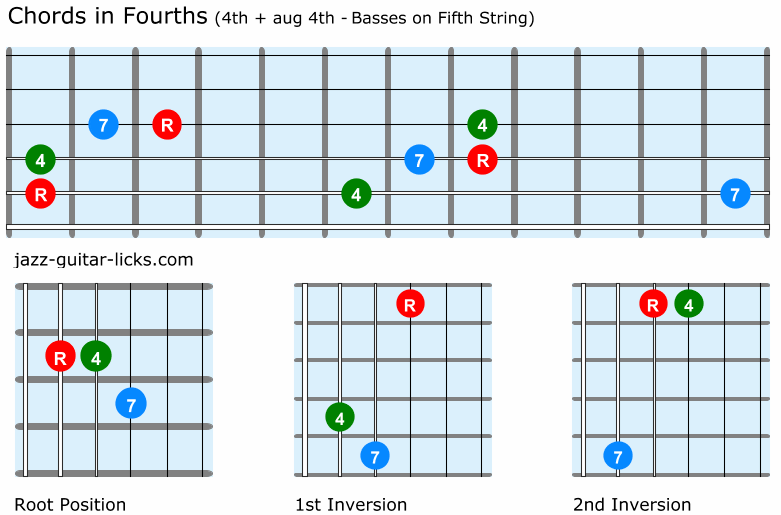 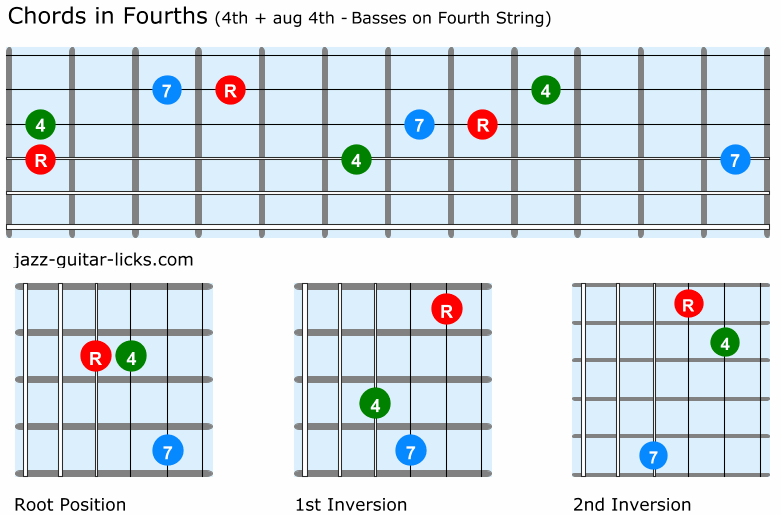 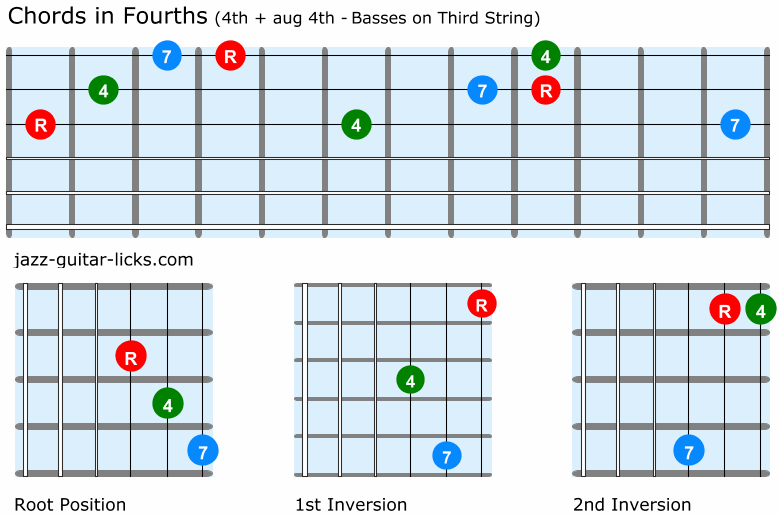 Fourth chords made of aug4th + 4th

The four following guitar diagrams are related to the degree IV of the major scale. They are built by stacking an augmented fourth and a perfect fourth. 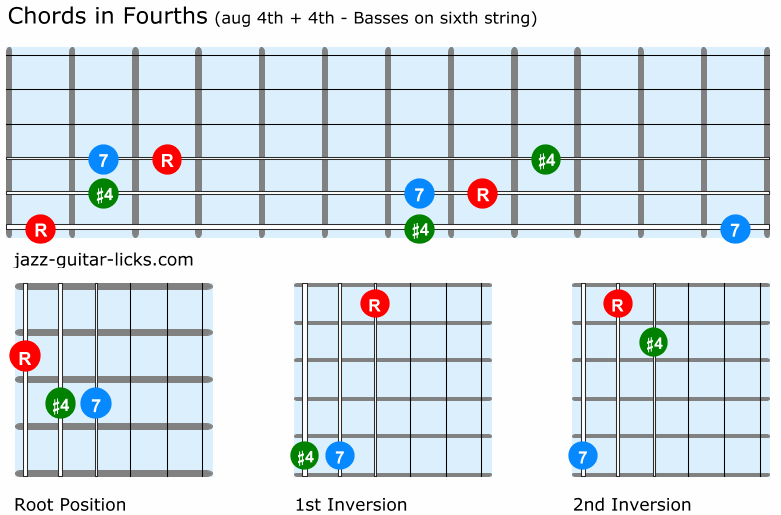 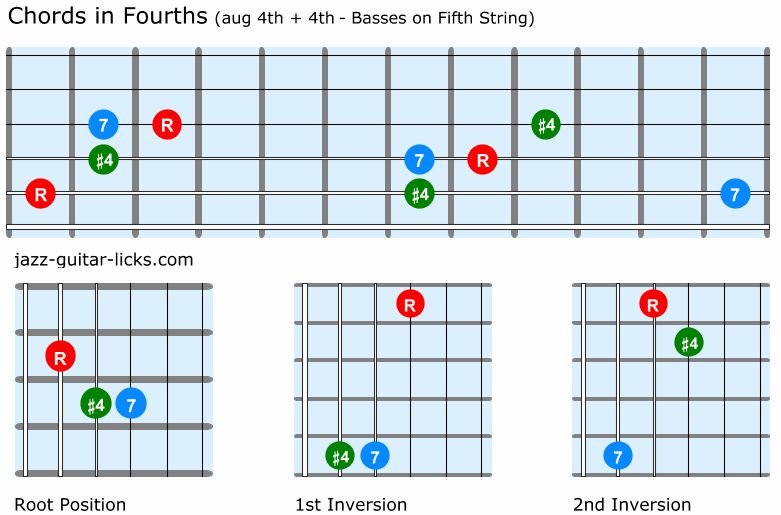 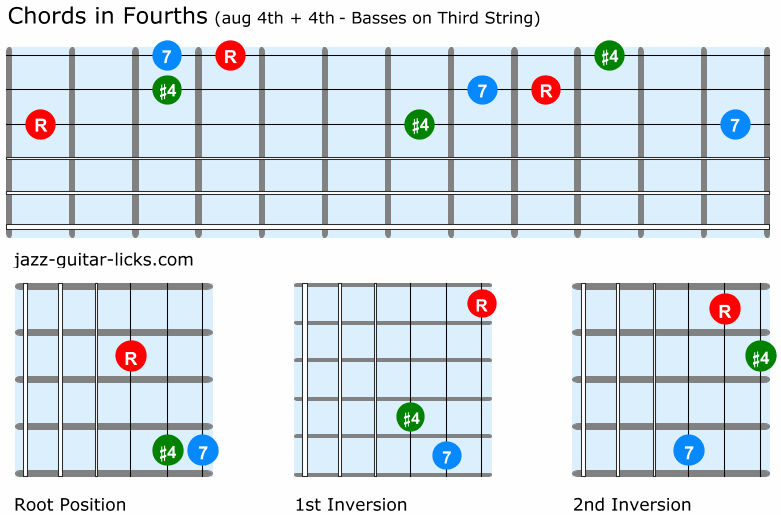 Quartal harmony yields a somewhat harmonically ambiguous sound because the voices have a less direct relationship to the root of the chord. It is difficult to indentify a tonal center with chords built in fourths. There can be more than one chord quality for a fourth chord.

Here are some examples that show you how to play the C major scale harmonized in fourths on the guitar.

Quartal harmony of C major scale starting from the I degree.

Quartal harmony of C major scale on strings 6,5 and 4.

This example starts from the V degree of the major scale.

Quartal harmony of C major scale on strings 5,4 and 3.

Quartal harmony of C major scale on strings 4, 3 and 2.

This one starts from the III degree.

Quartal harmony of C major scale on strings 3,2 and 1.

This example starts from the V degree.

Adding another fourth in addition to the three-note chords previously seen will help you create more interesting chords. The added tone forms an interval of a tenth with the bass note.

It can be considered as a redoubled third (We call a redoubled interval, a simple interval carried in its octave). This note can be b10 or 10 (major or minor third) depending on the harmonization.

Quartal harmonisation of the C major scale with four-note chords on strings 6, 5, 4  and 3.

Adding the Third - So What Chord

The "so what chord" is a modern sounding voicing often used as an alternative to quartal voicings.

The origin of its name would be due to its use by Bill Evans in the head of "So what" by Miles Davis.

Here is an illustration of the "so what" chord. This one can be named Em7add11.

"So what" guitar chord diagram

Bar at the 7th fret with your first finger, put your second finger on the 2nd string at the 9th fret and you get the Em7add11 chord. 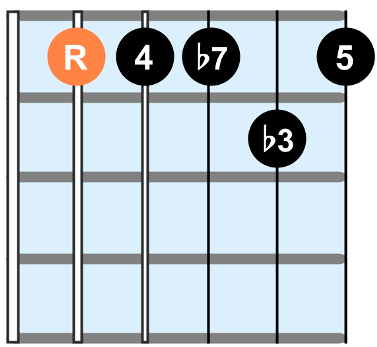 The "So what chord" is identical to the standard tuning of the five lowest strings of the guitar. (E-A-D-G-B). Some teachers and music methods named this chord m11 , but theoretically m11 chords must contain a 9.

So What - Miles Davis - Guitar Transcription

So what, by Miles Davis, from the best selling jazz album of all times (Kind of blue) is surely one of the most popular modal jazz tunes.

It is an AABA form centered around the D Dorian mode and modulating from Dm to Ebm. Chord progression consists of 16 bars of Dm7, 8 bars of Ebm7, and 8 bars of Dm7.

It is fairly simple to play, to understand because there are no harmonic progressions, this is the principle of modal tunes.

Once you have mastered this, you have to play the same lines and chords a half-step up (Ebm). 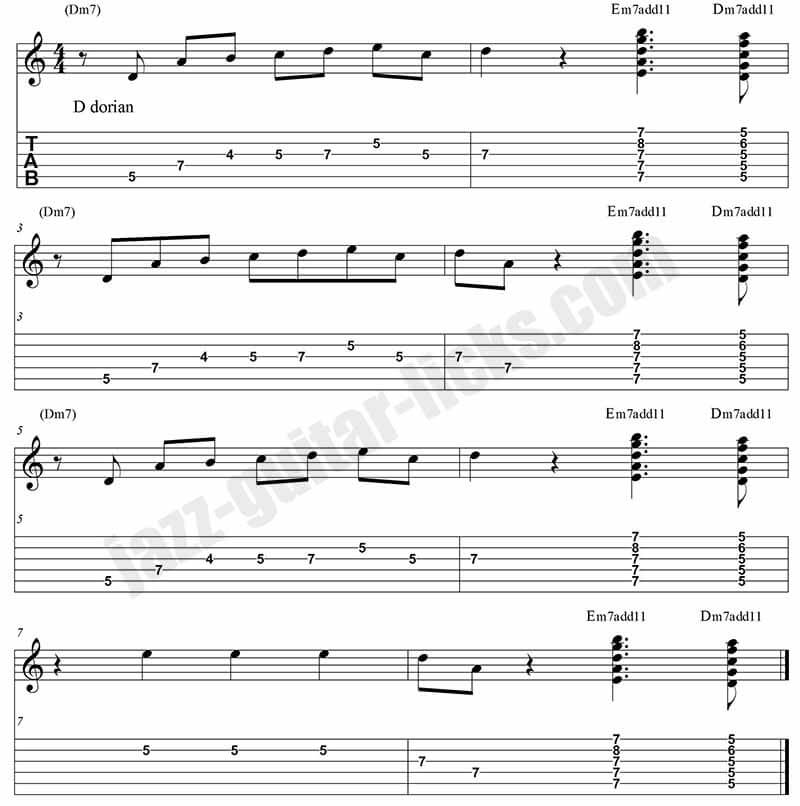 There are other examples of "So what chords" in "Impressions" by John Coltrane. McCoy Tyner was fond of this quartal harmonization. The chord progression is the same as "So what" (16 bars of Dm7, 8 bars of E♭m7, and 8 bars of Dm7).

There are many ideas of comping to pick up, so listen carefully and try to transcribe them. For the time, here are three examples using "So what chords" taking  from "Impressions".

A Fmaj7 is added between Dm7add11 and Em7add11. You can visit this page to see how to play major seventh chords on the guitar.

Here are the chords of the B section.