The major II-V-I sequence is the most common chord progression used in jazz music but also in a whole number of styles of music as pop, rock, blues, country. This theoretical element is a must know for any guitarist who wants to learn the jazz language. The 2-5-1 progression is present in many jazz standards (Summertime, Autumn leaves, Blue bossa, All the things you are and many more), this is why it is very important to master it.

How the II V I Progression is Built?

What Are The Chords of a II-V-I Progression ?

These chords (in their unaltered forms) are fundamental for a first approach. When they are grouped together they form the II-V-I progression.

Four note chords harmonization of the I, II and V degree of the C major scale. 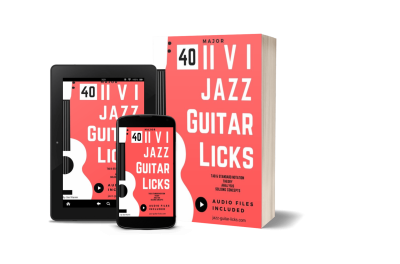 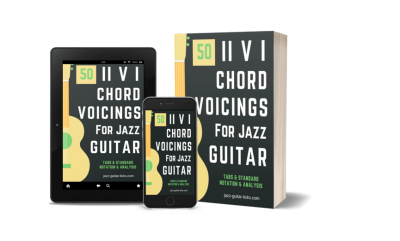 The II-V-I Sequence in Twelve Keys

Any jazz guitar player must be able to recognize and play a II-V-I in any key. Here is the II-V-I progression in all twelve keys.

How to Improvise Over a II-V-I?

When you want to improvise over a II-V-I sequence, the first step is to identify and connect the guide tones.

What are guide tones?

They are notes that establish the identity, the color of a chord. These notes are the third (3) and seventh (7), they guide the movement of the harmony from chord to chord. Let's take an example with a C major II-V-I sequence (Dm7 | G7 | Cmaj7) .

After understanding and playing II-V-I sequences in twelve keys using guide tones as shown in the previous example, you have now to create more elaborate jazz lines using arpeggios.

This is a chord whose notes are played one by one, this way you will create fluid lines and play the most important notes.

What Scales To Play Over a II-V-I Progression?

Here are the three modes to play generated from tones of the C major scale. These three scales are used for a basic approach of the II-V-I improvisation.

Bebop scales are a nice alternative when you want to add a bebop touch to your playing. They are made up of eight notes, including a chromatic passing tone.

Playing the Mixolydian mode or the bebop scale over the dominant 7th chord will be boring at the long run, that's why it can be interesting to add tensions in your jazz lines by using the altered and the half-whole diminished scales (including some passing tones).

Here are these two fundamental scales that will bring interesting altered lines in your playing.

Here is a short II-V-I guitar line for beginner, still in the key of D minor, built with the D Dorian bebop scale (D-E-F-Gb-G-A-B-C-) and the G dominant bebop scale (G-A-B-C-D-E-F-Gb-G). Notice that these two scales are connected with two guide tones, namely b7 and b3. You can see a C major seventh arpeggio (C-E-G-B) at the end.