The Ionian mode is the first of the seven musical modes and the most known among all the types of major scales. The other Greek modes are Dorian, Phrygian, Lydian, Mixolydian, Aeolian and Locrian. The Ionian mode has exactly the same notes as the major scale.

What Are The Eight Degrees Of The Major Scale?

How To Play The Major Scale On Guitar?

How To Harmonize The Major Scale?

How To Practice The Major Scale

Modes of The Major Scale - Click To Get The PDF

As you can see in the chart above the major scale consists of a tonic (1), second (2), major third (3), fourth (4), fifth (5), sixth (6) and major seventh (7). Note that the ninth, eleventh and thirteenth correspond to the second, fourth and the sixth.

It is very important to know how is constructed the major scale in order to be able to build any other major scale. You have to memorize the order of whole steps and half-steps which is W-W-H-W-W-W-H.

How To Apply The Ionian Mode?

What Are The Eight Degrees of The Major Scale?

The eight degrees of the major scale have a specific name : 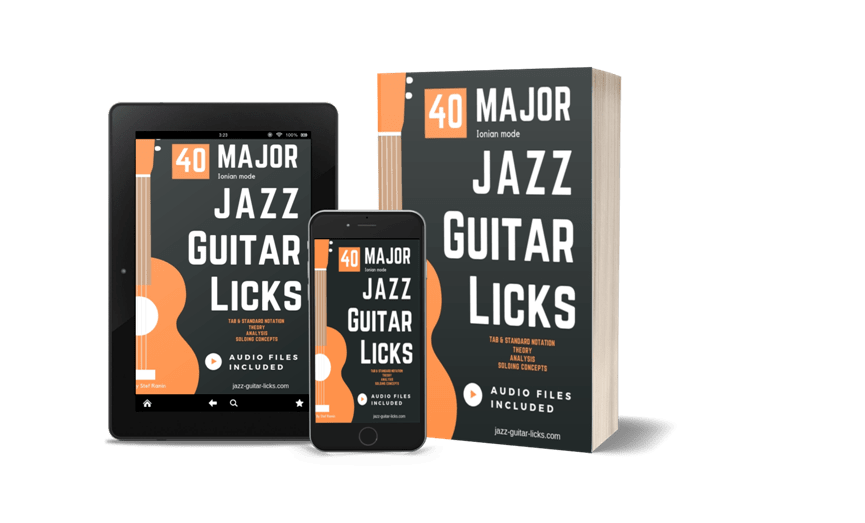 How To Play The Major Scale On Guitar?

There are many ways to play the Ionian mode on the guitar. Here are four recommended one octave shapes.

You need to know that each scale has a tonic note, this is the main note that a scale is build from, it gives its name to a scale.

To understand and hear correctly the sound of the major scale, it is better to play these patterns starting with the tonic (orange note in the diagram).

Now you are ready to play each note of the scale from the lowest root to the highest. It's a basic approach indeed, there are many tips for practicing scales. 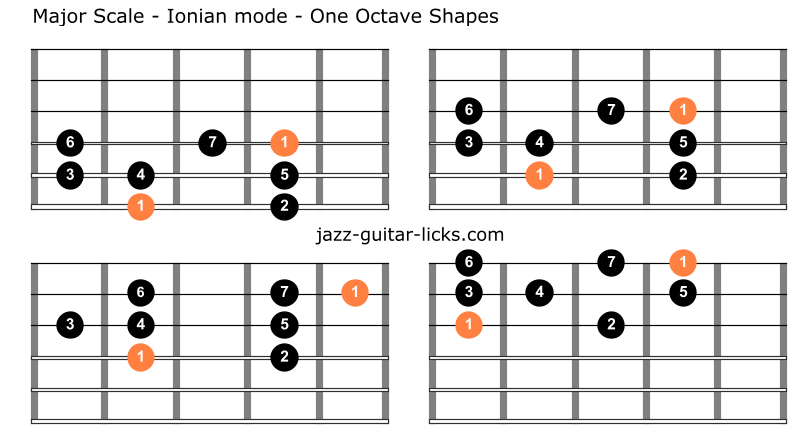 The two diagrams on the right show how to play the Ionian mode within two octaves.

One important thing to do when you practice scales is to sing notes while playing them on guitar. Indeed, this is an effective way to reinforce the link between what you play and what you hear.

This technique will help you to develop your musical ear. You can apply the singing/playing technique to all your guitar solos and improvisations.

Here are seven diagrams related to the seven major scales positions starting on each degree of the scale. The examples are in G major, all the shapes are movable, so you have to play them in all keys.

Notice that each shape can be seen as a mode of the major scale Ionian (Shape 1), Dorian (shape 2), Phrygian (shape 3), Lydian (shape 4), Mixolydian (shape 5), Aeolian (shape 6) and Locrian (shape 7). In that case the orange note (1) represent the Parent Major Scale (PMS). 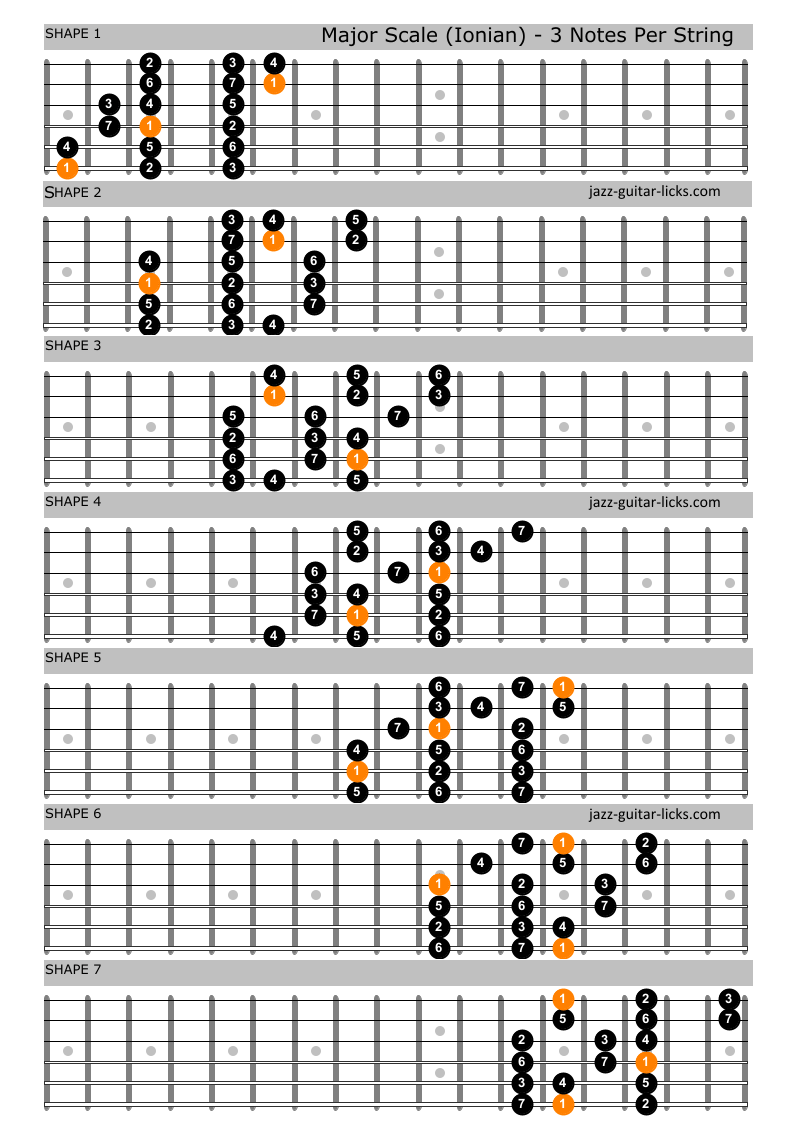 Chords of The Major Scale (Harmonization)

How To Harmonize The Major Scale?

In music theory, harmonization is the process of building chords from a given scale using common formulas. Here are the seven chords built from each degree of the major scale:

Triad chords : These chords are built with three notes stacked in thirds.

Seventh chords or tetrads : They are made of four notes stacked in thirds.

In the key of C, the C major 7 chord is built by stacking C, E, G and B respectively root (1), major third (3), perfect fifth (5) and major seventh (7). Go to see the blog post about the major scale harmonization.

How to Play The Ionian Mode in Twelve Keys.

How To Build Chords And Arpeggios From The Major Scale?

You must be able to write and play any major chord and arpeggio derived from the major scale.

The following provides a bunch of exercises that will help you practice the major scale on guitar. The first four exercises show how to play triads and tetrads built on each degree of the major scale.

The six other examples are built with 2-note intervals . They will help you learn your scales in diatonic intervals as  seconds, thirds, fourths, fifths, sixths and sevenths.

In the following audio clip the C major scale in harmonized in triads giving seven chords (drop 2). Try to do this in all twelve keys.

In this example, each chord of the C major scale is arpeggiated.

In this one you can clearly hear each tone of each chord of the major scale.

The arpeggios are played in order (I-II-III-IV,etc), but you can try to mix them and create new changes as I-III-V-VII or I-VI-II-V etc.

The exercises below are based on the notes of the C major scale. It is essential to practice them in twelve keys, in ascending and descending movements.

In this first example the major scale is played in intervals of seconds.

This exercise is played in position, within the span of 3 frets. You don't need to move you left hand.

Using large intervals as sixths and sevenths into your improvisations will make your lines more interesting and melodic.

In terms of picking you can play these exercises in alternate picking (down/up) or with your pick by alternate your thumb and index finger.

This line is built with the C ionian mode (C major scale if you prefer). You can hear a Cmaj7 arpeggio in it (C-E-G-B).

You can try to play it on the I chord of a II V I sequence for example.

This major line highlights two interesting tones which will give more interest to your playing. These two tones are the eleventh (F) and the thirteenth (A).

This easy major lick starts with the ninth (G) of C major. Be sure to play these major lines in twelve keys.

Feel free to add notes, hand effect as slides, pull-off, etc... and above all, play what you hear.