The diminished scale is one of the most used symmetrical scale in jazz music. It is an eight-note scale (octatonic) built by alternating whole and half steps.

These modes are based on an equal division of the octave into four (minor thirds divisions). They are often confused yet it is very simple, one must be played over diminished seventh chords (dim7) and the other one over dominant seventh chords (7th).

The Two Modes Of The Diminished Scale

What Are The Two Modes of The Diminished Scale?

What is The Whole-Half Diminished Scale Aka Fully Diminished?

How To Play The Fully Diminished Scale On Guitar?

Here are four guitar fretboard diagrams representing the whole half diminished scale within the space of one octave.

It is important to start with the tonic (1) the orange dot in the diagrams. Afterwards, you can try to play these shapes from another tone.

Dont' hesitate to play the corresponding chord, in order to hear the harmony.

Once you have memorized all the fingerings you must transpose them by moving the tonic on the desired note keeping the same intervals.

As has been mentioned previously, you can move any diminished scale position up or down three frets and you will still find the same notes, this is the principle of symmetric scales.

Here are two other whole-half diminished scale shapes with notes spead out over two octaves.

The half-whole diminished scale is widely used by jazz musicians to solo over dominant 7th chords, particularly 7b9 chords. It can bring interesting tensions in your playing by highlighting the b9, #9 and #11. It sounds great on the V of a major or minor II-V-I progression or the VIb9 of a I-VI-II-V progression that can be found into rhythm changes or jazz-blues tunes.

Here are the three main scales :

To understand the symmetry, it is interesting to compare the two modes of the diminished scale:

As it is shown in the previous chart, these two modes have the same notes.

How To Play The Dominant Diminished Scale On Guitar?

Here are four half whole scale one octave guitar diagrams.

The tonic note (1), the orange note, is the most important note of a scale. This is the note that a scale is built from.

Once you have learned and memorized these guitar positions, try to transpose them in twelve keys by moving the root up or down keeping the same intervals.

You can also create your jazz lines using patterns as it is explained before in this lesson. 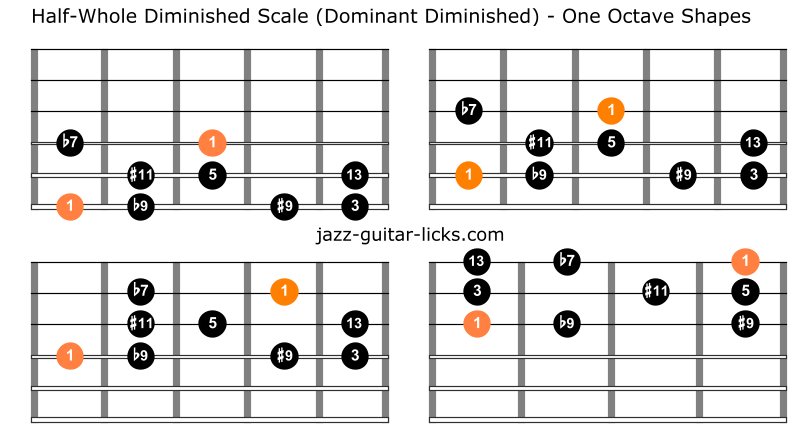 Here are the two other diminished guitar shapes that runs out two octaves in position.

You can also play the corresponding chord namely 7b9. This is an efficient way to relate scales and chords.