Dim7 chords are symmetrical, they are based on an equal division of the octave into four minor third intervals. That means there are four different diminished chords in one position.

For example, C diminished 7th contains four notes : C, Eb, Gb and A. Each note is separated by three semitones (minor thirds). Because a dim7 chord is made up of four minor third intervals, so there are three other diminished seventh chords in the Cdim7 chord : Ebdim7, Ebdim7 and Adim7. 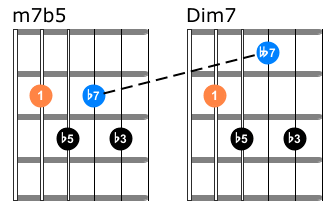 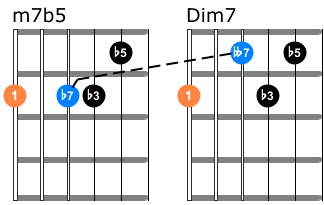 Keep in mind what's following, this could be very usefull for your guitar comping parts and chord melody arrangments. If you lower any note of a diminished 7 chord a half-step, you get a Dominant 7 chord.

Here are some examples of the possible connections between drop 2 chord voicings. These examples are based on the same drop 2 diminished 7 shape voiced R (root), diminished fifth (b5), diminished seventh (bb7) and minor third (b3). By lowering each voice of this chord your get four different drop 2 dominant 7 voicing shapes. 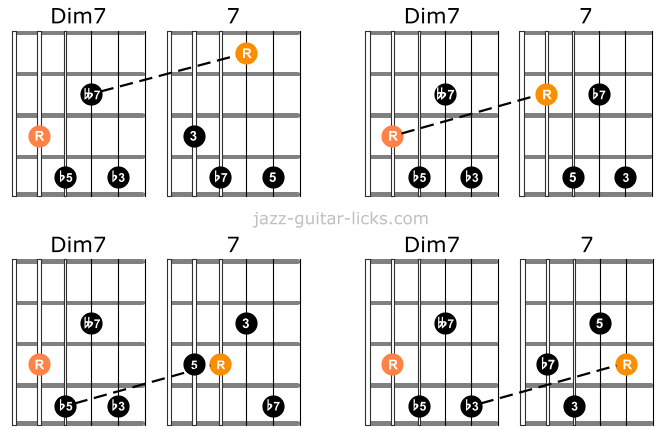 What Are Drop 2 Chords?

Drop 2 chords are the most popular chord voicings used in jazz guitar. They are built by dropping the second highest note of a four-notes closed chord to the bass. Diminished seventh close chord formula is R-b3-b5-bb7 that gives the following drop 2 chord formula b5 R b3 bb7.

It means that the notes of a chord are inverted. The root of an inverted chord is not in the bass. As you can see in the guitar diagrams above, there can be a third, a fifth or a seventh in the bass.

Here is a chart that contains four drop 2 diminished 7th voicings. You can see a root chord voicing with three inverted voicings. The root chord has its root (R) in the bass and the inverted chords have the b3, b5 and b7 in the bass. This is the principle of the inversion, the chord tones are played in a different order.

That's what drop 2 diminished 7 voicings look like on the whole guitar neck. Each voicing is represented by a different color.

Now that drop 2 dim7 voicings are no longer a secret for you, here are four drop 3 diminished 7th voicings with their eight related shapes to play on guitar.

You are probably wondering what's the difference between a drop 2 and a drop 3 voicing. As it is explained above, drop 2 voicings are made by dropping the second highest note of a four-notes closed chord to the bass. It is the same principle for drop 3 voicings, but this time it is the third highest note that is dropped to the bass giving these 4 chord voicings.

What Scales to Play Over Diminished 7 Chords?

There are three main scales to play over dim7 chords.

The Whole half diminished scale a an eight note scale that consists of a repeating pattern of whole steps and half steps. It's a symmetrical scale.

This is a an eight note scale too, that consists of a repeating pattern of halfs steps and whole steps. It is a symmetrical scale and the opposite of the previous diminished scale.

The super Locrian bb7 scale is the seventh mode of the harmonic minor scale.