7b9 Guitar Chords - Diagrams and Voicings

Dominant seventh flat ninth chords (7b9) are built by lowering the ninth of dominant 9 chords by one semitone, giving the harmonic formula : 1 (root), 3 (major third), 5 (perfect fifth), b7 (minor seventh) and b9 (minor ninth).

7b9 chords appear in many jazz tunes as Stella by Starlight, Misty and Bossa Nova songs as Black Orpheus, The girl from Ipanema. These chords bring a little bit of tension and sadness because of the b9, making the feeling more intense.

Here are three 7b9 positions to play on the guitar respecting the voicing chart below. Because it is physically difficult to play all the chord tones on the guitar, you will notice that the fifth is omitted. 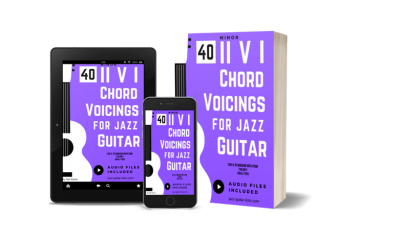 Dominant 7b9 chords come originally from the V in minor keys. Indeed, when you harmonize the V degree of the harmonic minor scale you get a V7b9 chord. Here is a minor II-V-I chord progression in Cm, including a 7b9 chord.

But 7b9 can be used as a V (or secondary dominant) for both major and minor keys, here are two examples :

7b9 chords can also be used in major II-V-I progressions. You see in the three exercises below the use of a rootless D7b9 chord with the fifth in the bass.

Notice that these chords are are indentical to diminished 7th chords, so you can move this position at intervals of minor thirds without changing the chord quality. 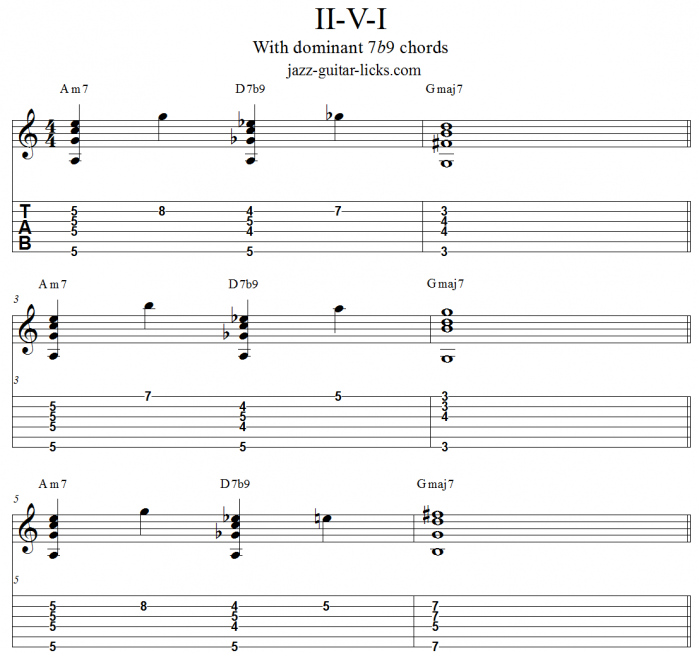 Dominant 7b9 chords can be built from drop 2 dominant 7 voicings, involving the remove of the root. This one is replaced by the b9. In other words, to build a 7b9 chord from a drop 2 dom7 chord, you just need to move the root 1 semitones (one fret) up to get the flat ninth (b9). 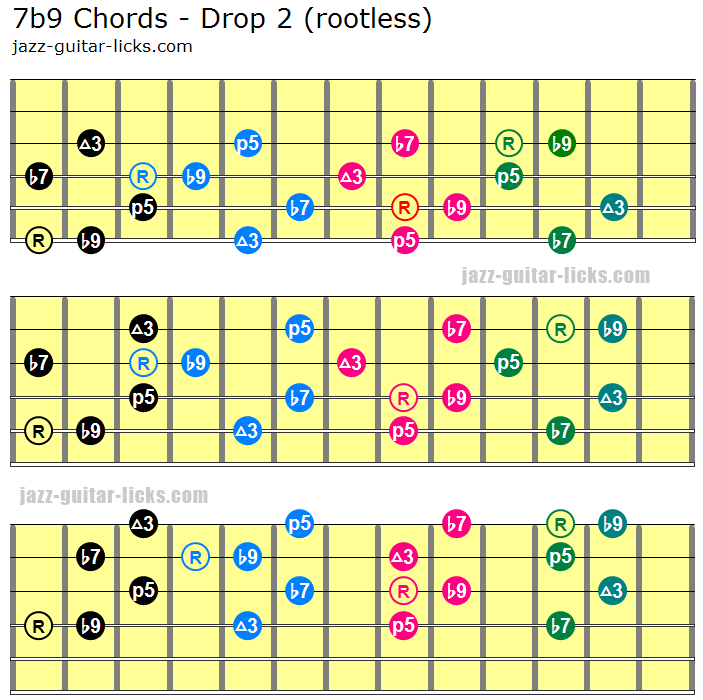 7b9 and diminished chords relationship

The dominant 7b9 chord functions as a dominant (V7) implying in its upper structure the tones of a symmetrical diminished chord. By taking a dominant 7 (Example with G7 : G, B,D and F) and adding the flattened ninth (Ab for G7), you built a 7b9 chord. Dominant 7b9 contains the same notes as a diminished 7th chord built on any of the chord tones including the flat 9 but without the root. So G7b9 (except the root) has the same notes as Abº, Bº, Dº or Fº.

By now, you have understood that a 7b9 chord can be replaced by a diminished 7th chord (chord substitution technique) starting on the major  third (3), the fifth (5), the minor seventh (b7) or the flat ninth (b9) of this 7b9.

Example in a C major II-V-I progression where the V7 is extended with a b9 giving a V7b9. This Dm7 | G7(b9) | CM7 becomes Dm7 | Bdim7 | CM7  |  and because of the symmetry of the diminished 7th chord there can be three other possibilities :

In this minor II-V-I chord melody sequence the Vb9 (G7) is replaced by Fdim7 :

RELATED LESSON / What Scale To Play On 7b9 Chords