What is The Whole Tone Scale?

The whole tone scale is a symmetrical scale formed by a succession of whole tone intervals. It is also a hexatonic scale,  made up of six notes that divide the octave in six equal notes. It  has no leading tone because all tones are the same distance apart.

The whole-tone scale can be used to add tensions to your jazz guitar improvisations over dominant 7th chords. Indeed, it contains a raised eleventh (or #11) and a raised fifth (#5) that can bring interesting new colors to your solos.

How is Built the Whole Tone Scale?

There are only two complementary whole tone scales :

This chart illustrates the tones of the twelve whole tone scales. It will help you build augmented triads and augmented seventh arpeggios as it is explained a little later in this page.

Here are four positions to play the whole tone scale on the guitar within one octave. As it is mentioned in the scale chart above, you can clearly see that there are six notes in each diagram.

The orange note "1" is the tonic, this is the note most important note, it gives the name to the scale.

Once you have memorized each guitar position you have to play them in twelve keys by moving the root to the desired note keeping the same intervals. 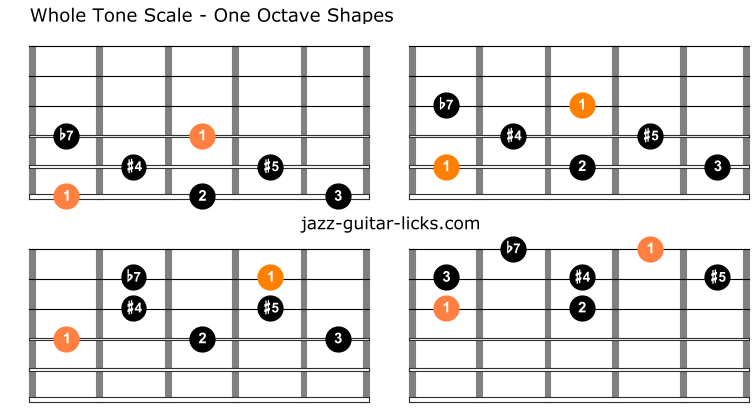 By extracting the tones 1-3 and 5 from the C augmented scale, we arrive at the C augmented triad (C-E-F#). The alternate chord symbol is C+. It works with any whole tone scale.

In the following pattern the augmented triad is played semitone by semitone in an ascending movement.

Augmented Triads in Cycle of Fourths

This pattern is to play augmented triads in circle of fourths. Circle of fourths progression is that every chord resolves to the chord a fourth above it until it finally concludes in the home key. You got finally all the possible chords in this progression.

In this pattern below each augmented seventh arpeggios is played in chromatical progression.

Circle of fourths for this one.