Here is a new free guitar lesson showing how to play the major scale (C major) in thirds. This two-in-one exercise also includes an easy walking bass line built with drop 3 chords. The full transcription with tab/score is downloadable in a PDF format here in the Online Shop.

The first part of this warm-up exercise is to play the C major scale in intervals of thirds (ascending and descending). Playing a scale in thirds means that each note is followed by another note a third away (major and minor). Example in C major : C (the tonic) is followed by E, D (second note of C) is followed by F, E by G, and so on. Notice that In bars 1, 2, 3 and 4 the C major scale is played in ascending thirds, whereas in bars 9, 10, 11 and 12 it is played in descending thirds.

These four chords are connected with bass notes from the C major scale, excepted F# in measure 6 and 14 which is a chromatic approach tone to G, fifth of Cmaj7. You'll find below the related "Short YouTube Video" and the two PDF methods to developp and improve your walking bass lines and knowledge in scales on the guitar. 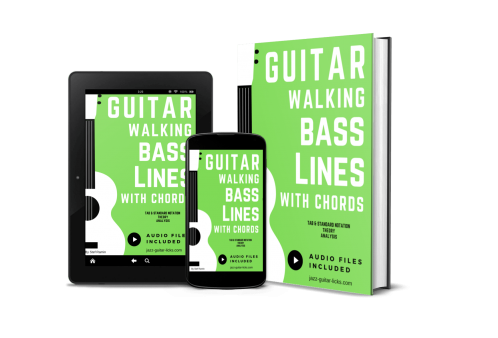