A Dominant 7th suspended chord, also known as "dominant seventh augmented fifth" chord or "dominant seventh sharp five chord," is a dominant 7th chord whose third is replaced by the perfect fourth. The absence of the third deletes the tritone between the 3rd and the b7. Dominant 7sus4 chords are neither minor nor major they are intermediaries between major 7th  and minor 7th chords. This gives a very open sound.

The interval pattern for dom7 chord is :

Why Use the 4th Instead of The Third ?

The fourth creates a suspension , a sound in which listeners are expecting to hear a resolution to the 3rd degree (the 3rd is suspended). A 7sus4 chord can resolve to the third of a dominant 7th chord but, it can also not resolve.

How to Play 7sus4 Chords on Guitar?

Here are twelve 7sus4 guitar chord shapes based on the drop 2 voicing chart below. 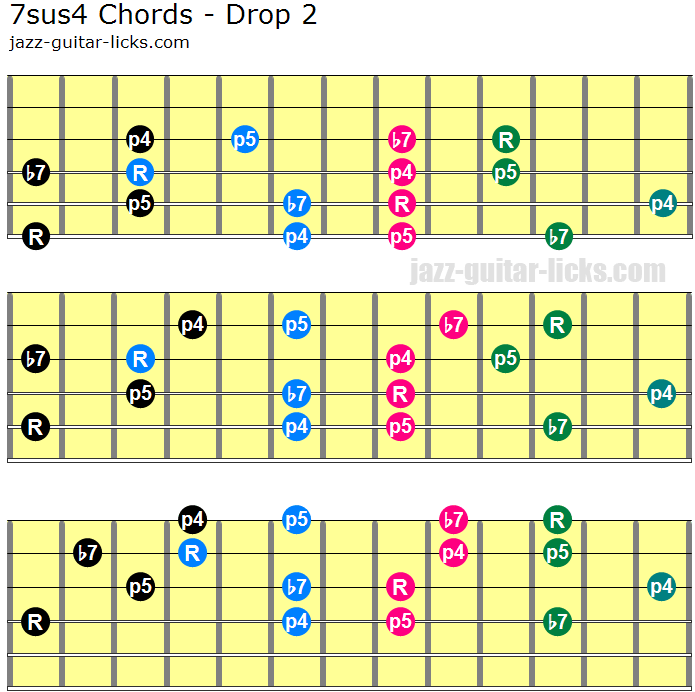 What are drop 3 chords?

Drop 3 chords have a particular way of stacking the notes in the chord. Like drop 2 chords they are very useful devices in music arrangement. Drop 3 means to drop the third top note of a chord down an octave. If your initial voicing is C-E-G-B (Cmaj7 chprd) the E will be dropped, then the drop 3 voicing will be E-C-G-B (Cmaj7 third in the bass). Here are the drop 3  dominant 7sus4 voicings and their respective guitar positions. 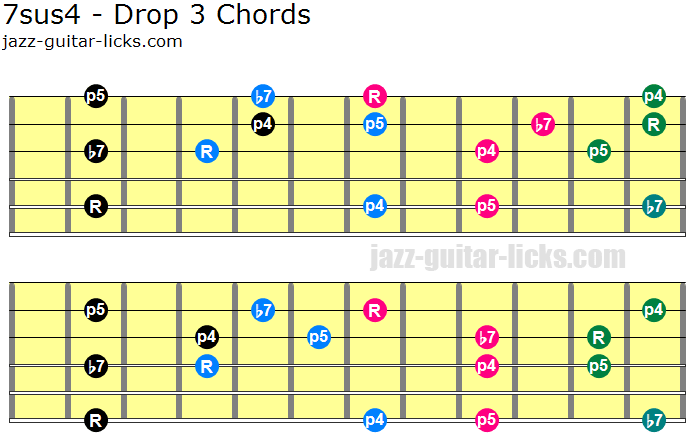