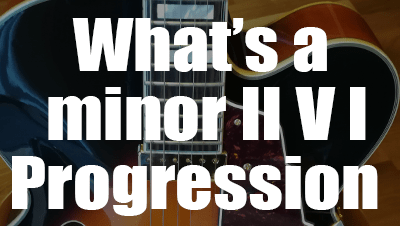 You will find minor II V I progressions in many jazz tunes as Autumn leaves, Blue Bossa, Black Orpheus, Stella by Starlight, The nearness of you, I love you, Speak low, Soul eyes, Valse Hot, Along came Betty, Stablemates, Are you real, I'll remember April, I hear a rhapsody, Tangerine, In your own sweet way, Nuages and many more.

This guitar lesson for beginners explains what is the minor 2 5 1 progression, what scales and what chords can be used for improvising over it.

The minor 2 5 1 progression is based on the harmonic minor scale. As an example, we are now going to build chords from each note of the C harmonic scale.

These chords are built by stacking thirds on each note of the scale, thus giving :

Now let's take the three chords that will serve to build the minor II V I sequence. These chords are constructed from the first, second and fifth degree of the C harmonic minor scale.

Here are three examples of minor 2 5 1 chord voicings. The first exercise uses the three most basic minor II V I chord voicings to know (Dm7b5, G7 and CminMaj7). You can see in the second example how the dominant 7 chord can be enriched with the b13 to add harmonic interest. In the the third exercise the dom7 chord is extended with the b9 and the b13. The I chord is simply a minor 7 chord, the major seventh as been omitted.

Firstable let's take a look at the three basic scales generated from tones of the C harmonic minor scale.

The scale starting on the second degree of the C harmonic minor scale is called D locrian 13 mode. It will used to play over the minor seventh flat five chord (II) (Dm7b5).

The scale starting on the fifth step is called G phrygian dominant. It will be played over the dominant (V) chord (G7).

The three guitar diagrams below show how these basic scales look on the guitar. They represent the first choice for improvising over a minor 2 5 1 progression.

What Scales To Use Over a minor II V I Chord Progression?

Theoretically, you could simply play the harmonic minor scale over the whole minor II-V-I sequence because all notes in the scale relate to the chords constructed from it. At the long run it will be boring to play only notes from the harmonic minor scale, so here are some other ideas to spice up your improvisations and embellish your lines.

The Locrian mode is best know as the seventh mode of the major scale, but it is also the second mode of the harmonic minor scale aka Locrian natural 6 mode. This is the basic mode to play over a m7b5 (half-diminished) chord.

Logically, we should play a b9 over Dm7b5 but to brings new colors to our musical language we can add the 9 instead of b9. In this way we leave the tonal context for a modal approach. By adding the ninth to the Locrian mode, we get the Locrian # 2 mode. This is the sixth mode of the melodic minor scale.

The locrian bebop scale is the same as the Locrian mode including a passing tone (5). There is eight notes in it (octatonic scale).

As we have seen previously the basic scale to play over a dominant 7th chord in minor harmonic key is the Phrygian dominant mode. By taking the first, the third, the fifth and the minor seventh we obtain a dominant 7th arpeggio. Playing this scale and arpeggio is a little too ordinary and not very interesting. In this case we usually play a diminished seventh arpeggio starting on the major third (3) of the chord.

Diminished seventh arpeggio (3 to b9)

Here is a comparison between the G Phrygian mode and the Bdim7 arpeggio.

Playing a diminished seventh arpeggio over a dominant seventh chord brings the b9. This technique also called "3 to b9" is widely used by Wes Montgomery, Grant Green and many jazz players.

To enlarge your musical vocabulary it is possible to think G7 as an altered chord, therefore using notes of the altered scale over it.

The "Altered scale" (also called "super Locrian mode") is the seventh mode of the melodic minor scale. Playing it over a dominant 7th chord brings tension and more sophisticated sound. The combination of the Locrian # 2 mode and the altered scale works well over II-V sequences.

Over the im Chord (CmMaj7)

This chord is not necessarily present after a minor II-V sequence. Very often the minor II V is followed by a major II V I. Dm7b5 being the III of this major II V I. Example with the following progression in Bb:

However, we will see what we're going to play. The most obvious solutions are :

The harmonic minor scale contains seven notes, these are the same as the natural minor scale (Aeolian mode) except the seventh degree that is raised by one semitone.

This minor II-V-I line uses the E Locrian 6 mode (E-F-G-A-Bb-C#-D) aka Locrian 13 which, is the second mode of the Harmonic minor scale. In bar three, there's a chromatic approach from above to target the b6. Then, there are two enclosures outlining the 5th and the 11th of Dm7.