What Are The Other Main Types of Triads?

There are 3 other main types of triads :

Before starting to learn and play the diminished triad chords below, you need to know what is an inverted chord. This is simply a chord whose notes has been arranged in a different order. In other words, you will play the same notes as the root chord, but with the third or the fifth in the bass instead of the root.

How to Play Diminished Triads in Close Position?

The chart below shows you the closed diminished triad voicings.

Closed guitar chords are those where the positions, fit within the space of one octave. The 4 diagrams below contains 12 triad chord shapes in close position divided into 4 categories : 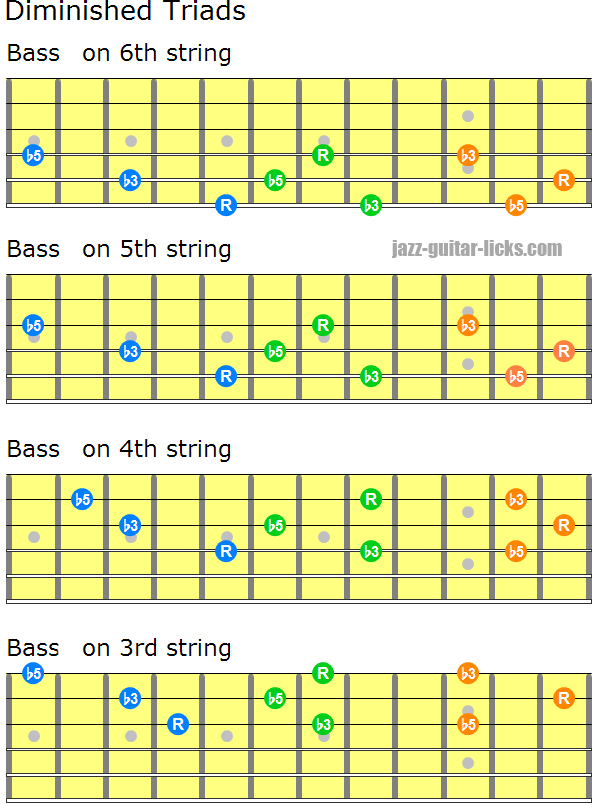 Now you know how to play diminished triads in close position on the guitar the time has now come to talk about open triads.

What Are Open Triads ?

The notes of an open triad are spread over more than an octave, unlike a closed triad that has its notes included in one octave.

How to Build Open Voiced Triads ?

You just have to drop the middle voice (so the second voice) up on octave. That's the reason why open triads are also commonly named "drop 2 triads".

Drop the minor third (which is the middle voice of the close voicing) up an octave. We now get a new voicing : B, F and D.

You can even mix these tones to get two other diminished voicings. (check out the chart and the guitar diagrams below). 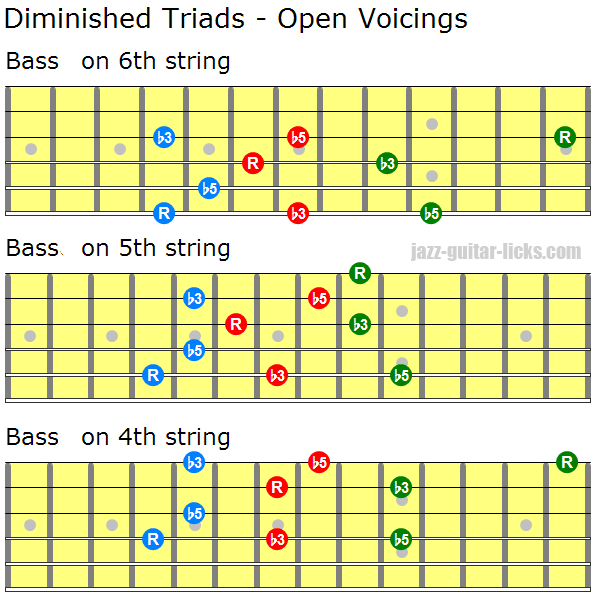 The chart below show what notes are highlighted when a diminished triad is stacked on a specific chord tone. Let's take as an example the first row for a better understanding. When playing a diminished triad starting on the #4 of a major chord, you bring out the augmented eleventh (#11), the thirteenth (13) and the root (1) of this chord. Meaning that if you play F#dim over C major your get F# (#11), A (13) and C (1).

Here below you see what notes stand out when stacking the twelve diminished triads over the same bass note (C in the example).