What's The Difference Between the Aeolian Scale and the Dorian Mode?

How To Apply The Aeolian Mode?

How To Play The Aeolian Mode on Guitar - One Octave Shapes

These four shapes represent the Aeolian mode positions on the guitar neck.

It is recommended to play these patterns starting with the root note "R", in order to hear correctly the color of this scale.

It is important to practice the Aeolian mode in twelve keys. For this, you just have to move the root note (R) to the desired tonality while keeping the same position.

Let's take an example : To play the A Aeolian mode using the shape 2 you must place your first finger on the fifth string at the twelfth fret. 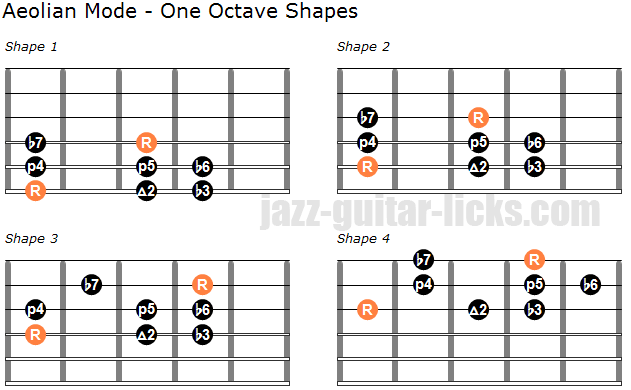 Contrary to the four previous diagrams, the next couple of shapes show the Aeolian mode covering two octaves. Once again, try to play these shapes in all twelve keys.

The Aeolian Mode in Twelve Keys

How To Play The Aeolian Mode In Twelve Keys?

Here is the Aeolian mode in twelve keys. Each jazz guitar student must memorize the structure of this minor scale that is W-H-W-W-H-W-W and be able to play it in any key on the guitar.

The parent major scale is shown in this chart, it is located a minor third above the tonal center. For example, the A Aeolian mode contains the same notes as the C major scale. These two modes are made up of the same tones, but they have a different tonal center.