The Tritone Scale - Shapes, Charts and Theory For Guitar

The tritone scale is a synthetic scale and also regarded as being a symmetrical scale, because it is built with two same patterns made of one minor second + one minor third + one major second, a tritone away (three tones) hence its name.

The tritone scale can also be seen as two superimposed major triads and also two dominant seventh arpeggios. The formula is tonic (1), minor second (b2) , major third (3), augmented fourth (#4), perfect fifth (5) and minor seventh (b7) making it a hexatonic scale (made of six pitches)

Here is the formula chart for the tritone scale, notice that the #4 is sometimes labelled b5. However, it is better to call it #4 in order to avoid any confusion between the 5 and the b5. Indeed, theoretically there can not be two fifths in a scale.

The tritone scale can be seen in three ways:

2. A combination of two major triads, this lead us back to the triad pairs improvisation system, that is to combine two triads to build modern improvised jazz lines.

As shown in the example, you can see and ear that the tritone scale contains two major triads.

3. A combination of two dominant seventh chords, that are actually the two previous major triads with an added seventh (1-3-5-b7), thus giving C7 and F#7 (or Gb7).

The most efficient way to learn a scale for the first time is to practice it using one octave shapes (the notes are within the space of one octave), anywhere on the guitar neck, up and down, in all twelve keys. 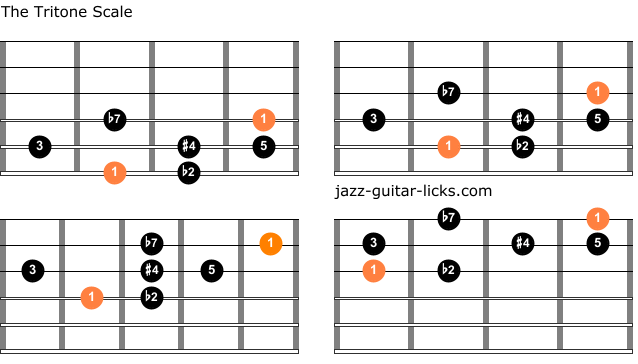 Now, try to practice the Tritone scale in position, in order to cover at least two octaves as shown in these two diagrams.

The next two shapes show how to play the tritone scale using the 3NPS technique (3 notes per string).

As you will certainly have noticed, the tritone scale is actually a dominant 7 chord embellished with a b2 and a #4 respectively b9 and #11. Making this scale a good option for improvising over dominant chords when you want to create jazz lines that bring in a little bit of tension.

Here are some altered dominant guitar chord shapes that fit well with the tritone scale. Don't hesitate to create your own exercises by mixing a tritone scale lick with one of these chord voicings as shown in the example below. 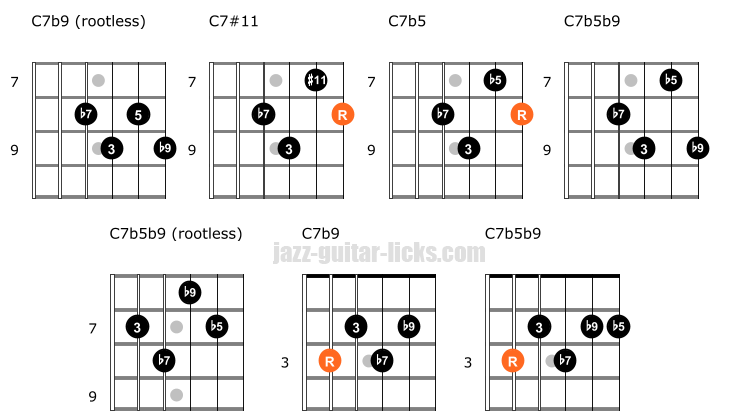