How to Play Half-diminished Arpeggios on Guitar?

Here are four m7b5 guitar arpeggio patterns. The notes of each shape are included within the space of one octave.

Remember that the root is the most important note, it gives its name to the arpeggio.

Playing the corresponding chord is a nice way to bring them together. 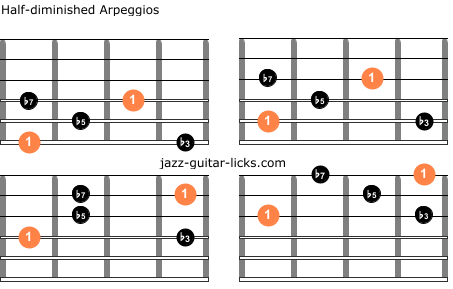 The two diagrams show how to play m7b5 arpeggios within two octaves in order to cover the six strings.

Half-diminished arpeggios are related to modes from various scale families as :

How to Use Half-Diminished Arpeggios?

The basic and most obvious way is to play these arpeggios over a m7b5 chord, it's so obvious that we're not going to linger on. The m7b5 gets interesting when it is played over a minor seventh chord starting on the sixth, for example :

The Dm7 chord is made up of four notes :

The Bm7b5 arpeggio is made up of four notes too :

By playing a Bm7b5 arpeggio over a Dm7 chord we get this :

Over a II-V-I sequence:

The second way is to play a m7b5 arpeggio over dominant 7th chords starting on the major third, example over a G7 chord. The G7 chord is made up of four notes :

When playing a Bm7b5 arpeggio over a G7 chord we obtain this following :

over a II-V-I sequence :