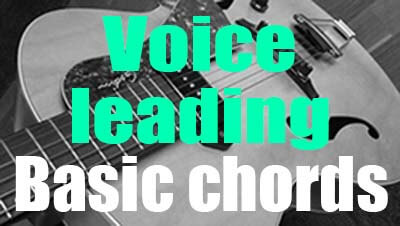 What is Voice Leading in Music?

"Voice leading" is a term that refers to the smooth progression of each voice of a chord. This technique consist to move individually one or several voices up or down by a step from one chord to the next.

Voice leading is very used by composers and improvisers in order to connect chords instead of bouncing them around.

The aim of this lesson is to connect or voice-lead basic four-note chords of the same types by moving only one voice. This technique is very fun and should help you learn some of the most important chords used in jazz guitar.

The chords in the five following exercises below are voice led so that only one voice moves at a time.

Four dominant voicings are used in this exercise. G7b5, G7, G7b13 and G13. They all contain the same root (G), the same third (B) and the same minor seventh (F). The first chord is G dominant flat five, the b5 moves up to the perfect fifth of G7, which moves up to b13 of G7b13 and moves up once again to the thirteenth of G13.

For this last example we will be playing four dominant chords. The basic idea is to move step by step the root of the first dominant seventh drop 2 voicing in order to get three different dominant ninth chords, one with a flat nine (b9), one with a non-altered ninth (9) and one with a raised ninth (#9), best known as "The Hendrix chord".