The Blues Arpeggio - How To Mix Major And Minor Triads

Traditionally, when a student learns to improvise over a jazz, blues tune, he taught pentatonic scales, major triads or dominant 7th arpeggios, but there is something missing to get this specific and exciting jazz-blues sound, "The Blues Arpeggio". This is a very interesting and important device to use over this musical genre. It is a mix of a major triad and a minor triad, it contains both major and minor thirds, representing one of the most vital elements of the blues. In this jazz guitar lesson we will see how to build the blues arpeggio, how to practice it and how to play it on a blues.

How to Build Major and Minor Triads ?

First, you need to know how to build major and minor triads, these are two inevitable basic elements to master. You need to know that a triad, as its name implies, is a set of three notes. These three notes can be played one by one (arpeggio) or together (chord). A triad is generally made up of a root (1), a third (which can be major or minor) and a fifth (perfect, diminished or augmented).

First, it is recommended to practice the blues arpeggio starting from the root (1), the minor third (b3) and the fifth 5) in ascending and descending movements, thus giving six patterns. Be sure to practice them in twelve keys. All the following examples are in the key of F7. So, we get the root (F), the flat third (Ab), the major third (A) and the fifth (C). These four notes represent the F blues arpeggio.

1-Starting from the root (ascending)

2-Starting from the root (descending)

3 - Starting from the minor third (ascending)

4 - Starting from the minor third (descending)

5 - Starting from the fifth (ascending)

6 - Starting from the fifth (descending)

How to Practice Blues Arpeggios?

What's The Circle of Fifths?

Now that you are familiar with the 6 previous patterns, you can try to play them following the circle of fifths (or circle of fourths). The circle of fifths is a useful device when you want to practice scales, chords or arpeggios over the twelve keys. Generally it is presented in the form of a circular diagram that shows the sharps and flats in each key, and how a key works in relation to one another. You can check this out Interactive circle of fifths by Rand Scullard.

What's The Circle of Fourths ? 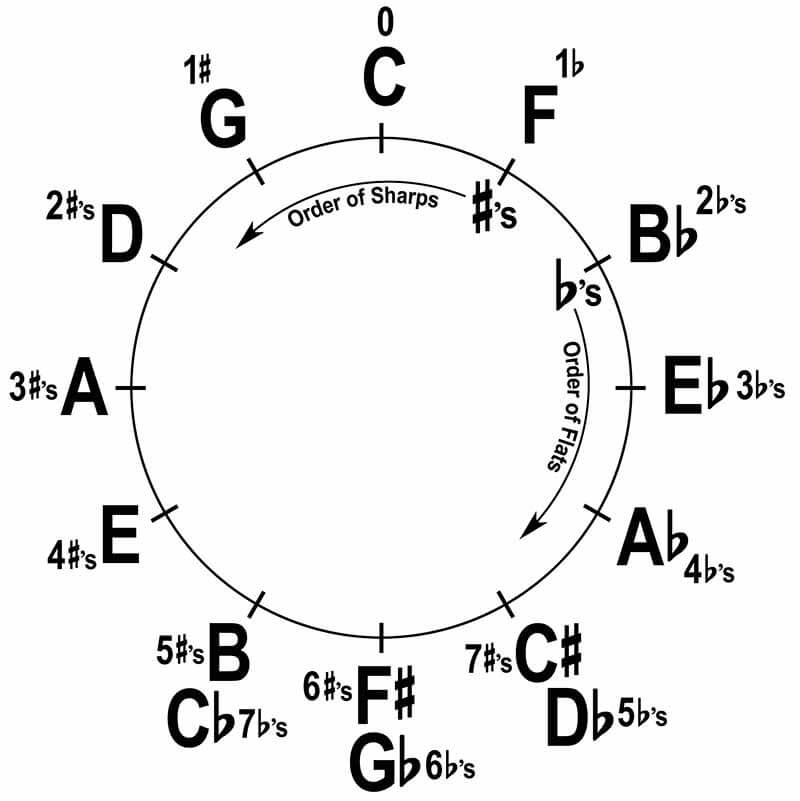 First, let's take a basic blues progression in F. Any guitar student must be able to build a basic F blues. It contains only three chords built on the I7-IV7 and V7 degrees of F. Thus, Giving F7 (I), Bb7 (IV) and C7 (V).

So, the blues arpeggios played in the blues progression must be :

Now that you are familiar with the blues arpeggio, try to put it into your improvisations over jazz, blues tunes such as Watermelon man by Herbie Hancock, Blues for Willarene by Grant Green, All blues by Miles Davis, Blue Monk by Thelonious Monk, C jam blues (Duke Ellington), Freddie Freeloader (Miles Davis), Mr P.C (John Coltrane), Straight no chaser (Thelonious Monk), West Coast blues (Wes Montgomery), Tenor Madness (Sonny Rollins). The list goes on and on.