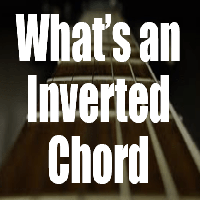 An inverted chord is a chord whose notes are stacked in a different order. In other words, the notes of a chord, whether it is a triad (containing just three notes) or a tetrad (built with four notes), can be reshuffled in a different way.

The name of the chord will still remain the same, but the bass will not necessarily the root note. This is the lowest note (the bass note) that determines the name of the inverted chord. So, chord inversion simply refers to which note is in the bass. You will find in this article some example for a better understanding of what are inverted chords.

This also naturally applies to all types of triads (minor, major, diminished, augmented and suspended).

Notice that the triad chords previously seen are named "close voicings" because all notes are placed within one and unique octave. There also other combinations of triad chords called "spread voicings or open chord voicings". The notes of are spread out over more one octave.

As you see in the examples below, an open triad voicing is built by dropping a note of a close triad chord voicing an octave higher thus, giving a new chord spread over more than one octave.

Seventh chords are built with four-notes, these are commonly named tetrad chords. Like triads, seventh chords can be inverted by moving the bass note up an octave, thus providing three other inverted voicings.