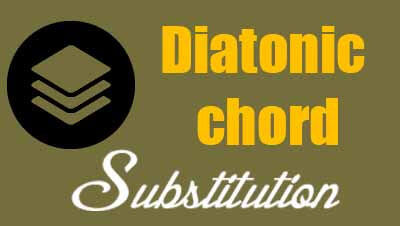 What Is Diatonic Chord Substitution?

What Is Chord Substitution?

Chord substitution is to replace a chord by another one to add more harmonic interest to a piece, a song or a chord progression. In jazz music, this technique is widely used by composers and improvisers. It can be useful to reharmonize a chord sequence or a jazz standard.

This lesson will help you better understand what is the diatonic chord substitution.

Firstable, you need to know that there are many types of substitutions that can be classified into two main families :

What is a Diatonic Substitution?

Diatonic substitution consists in replacing a chord with another chord built on the notes of a harmonized scale, provided that these chords share common tones (that they have the same function) and support the melody.

This is called diatonic substitution because you 're not altering any notes of the scale. It is clear and easy to understand, it sounds no wrong. To explain this substitution, we can harmonize a diatonic scale by stacking thirds to highlight the relationship between the main chords and their different substitutions.

Diatonic substitutions are generally made between chords whose roots are a diatonic third apart. These are the chords that have the most notes in common.

As you can see, the following chords have three notes in common :

The notes of the diatonic scale called scale degrees have specific names and numbers related to their function and positions to each other on the scale.

What is The Relative Minor?

In the minor / major tonal system, the most important relationship is the one that unifies the major chords (I, IV) to their relative minors. Each major chord can be substituted with the chord whose root is a minor third down. Thus giving :

In this example the I chord (Cmaj7) is replaced by the VI chord (Am7). This substitution works well when the I chord is followed by the II chord (diatonic IIm7 or dominant II7).

In jazz music, the most used substitution is the substitution of the I chord with its secondary relative minor. Here is an example of what a common I-VI-II-V sequence can become. As you can see, Cmaj7 is replaced by Em7.

There are two main possibilities to replace a dominant seventh chord, the V chord (G7). It can can be substituted with the VII (Bm7b5) and the II chord (Dm7).

The first possibility, and surely the most used in jazz music, is the substitution of the dominant chord (V) with the II chord. Example in the key C major, for G7 you can play Dm7 instead. This technique is discussed in the Joe Pass guitar style book.

The following example shows you how you can replace Dominant 7 chords from the bridge of rhythm changes. Each dominant 7th chord is replaced by the minor II chord of its related key.

Now let's take the first four bars of a blues progression. In bar 4, Bb7 can be replaced by a II-V sequence (Fm7 Bb7). You can also call it a II-V substitution.

Even if it is rarely used in jazz music, you may be interested in this following second substitution. This is the substitution of the dominant with the half diminished chord, degree VII of the major scale.

Indeed, the half-diminished chord contain the 3 top notes of the V chord. Example with G7 (V) and BØ (Bm7b5). The 3 top notes of G7 are B, D and F representing the major third (3), the fifth (5) and the minor seventh (b7) of this dominant chord.

The three first notes of Bm7b5 are B, D and F, respectively root (1), minor third (b3) and diminished fifth (b5). Now, try to add a ninth to the dominant seventh chord and you get the minor seventh of the half diminished chord. As you have understood, you can replace the V7 chord with the VII chord.