Learning and playing scales can be an important part of any guitarist’s practise regime. By playing scales in a variety of ways we can develop our familiarity with the fretboard beyond simply going up and down scales.

In this tutorial we will look at combining two different scale patterns by shifting between them on various strings. For this we are going to use two patterns of an Eb Melodic minor scale, patterns 2 and 3. The Melodic minor scale consists of the intervals R 2 b3 4 5 6 7 (R is for the Root note).

► Shifting between the patterns on the A string

► Shifting between the patterns on the D string

► Shifting between the patterns on the G string

► Shifting between the patterns on the B string 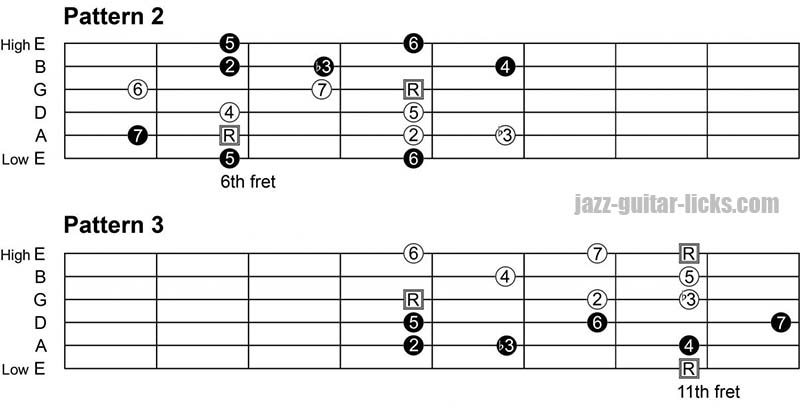 The different shades of light and dark in the scale diagrams show separate occurrences of what is actually the same seven intervals of the Eb Melodic minor scale, repeated across different octaves. This is not for beginners I’m afraid so if you are not already familiar with these scales and how to play them then you’ll need to familiarize yourself before moving on.

Both the above patterns have been shown in their relative places to each other on the fretboard, reflecting how Eb Melodic minor pattern 3 is further up from Eb Melodic minor pattern 2. Notice how most of the intervals on the 8th and 9th frets are in the same locations for both patterns. These are the points at which we will transition between the two patterns. We will start with shifting on the A string, followed by the D string, the G and finally the B string.

Shifting between the patterns on the A string

In the below guitar tab, some italic numbers have been added underneath to show which fretting hand fingers to use for the above notes; 1 = index finger, 2 = middle finger, 3 = ring finger and 4 = little finger.

These show the ways in which the fretting hand can deal with the shifts, both on the way up and on the way down, so if you are ever unsure where the shifts are, just look for the italic numbers underneath.

Shifting between the patterns on the D string

For the ascent on bars one to two the first approach (1 3 2 4) relies on the 2nd finger jumping up to the 10th fret. The second approach just below (1 1 2 4) is not as efficient as it relies on the same finger playing different consecutive notes with a jump up from the 6th fret to the 8th fret by the 1st finger. Given the choice I would opt for the first approach. You may prefer the second, as it can be subjective to a player’s particular technique.

Shifting between the patterns on the G string

For the descent on bars three to four (4 3 1 3 1) the 3rd finger jumps down to the 7th fret. This, I find, is pretty much the best way of shifting on the descent, therefore the only approach shown for it.

Shifting between patterns on the B string

For the descent on bar three (4 2 2 1) the 2nd finger jumps down to the 7th fret straight after having playing the 9th fret. The second approach just below (4 2 1 1) relies on the 1st finger jumping down to the 6th fret from the 7th fret. For all instances of shifting on the B string whether ascending or descending, you may have noticed the same finger is being used to play different consecutive notes.

Those four exercises can make a good hours practise session with a metronome. The position shifts could also be treated as their own separate exercises for moving across a single string. Below is an example of the first approach from earlier for going up and down while shifting across the A string.

The principle of shifting between patterns can apply to any scale, for any pattern, anywhere on the fretboard, whether that’s a relatively simple Major scale between patterns 1 to 2, or say, a more advanced Locrian Natural 2 scale (the mode off the 6th of the melodic minor) between scale patterns 4 and 5. You will come across different technical challenges depending on what scales and patterns you use and which string you shift on.

Shifting patterns makes for a good technical coordination exercise but is also good for developing fret-board familiarity beyond staying within one CAGED scale shape. Don’t forget to use a metronome when you practise!

Gareth Evans is a musician, teacher and writer with interests in electric guitar, classical guitar and bass. Check out his Guitar Website for more guitar tips and to learn more about his work.