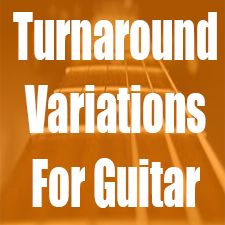 Turnarounds are a section of two or four bars at the end of a tune. Their role is to create a harmonic transition going back to the beginning. They are present in many jazz tunes and are an important part of "rhythm changes" progressions. They are also used to create effective jazz intros and endings.

This lesson with guitar tabs contains 17 exercises to gain a better understanding of the I VI II V variations.

Before tackling turnarounds, here are some important harmonic tricks that any jazz guitar player know.

Chord substitution involves replacing a chord by another. These chords can belong to the same key or can be outside, provided that they share common notes with the chord they replace. Here are some chord substitutions that can be used in turnarounds :

Diatonic substitutions are the most used and the easiest to understand. How do they work? It is very simple, each chord within a same key can be replaced with another chord a diatonic third apart.

Let's take an example. When harmonized in thirds, the C major scale provides seven chords that are :

This can be applied to any turnaround and any chord progression.

Tritone subs (or dominant chord substitution) is to replace a dominant 7 chord by another dom7 chord whose root is a tritone (three whole-steps) away from the chord of origin . Example with G7 (V), that can be replaced by Db7 which is a tritone away.

This priniciple can be applied to any dom7 chord of turnaround.

Diminished Substitutions - 7b9 vs Dim7

As you will see in the next turnaround variations, 7b9 chords will be used as the degree VI in place of non-altered dom7 chords. These chords have a solid harmonic relation with diminished 7 chords.

Now let's take the concept one step further. Diminished 7 chords are symmetrical, they are built by stacking minor third intervals. It means there are four diminished chords in one chord.

Example : C diminished 7th is built with four notes : C, Eb, Gb and A. Each note is separated by a minor third (three semitones) so, there are three other diminished seventh chords built on each note of Cdim7 chord : Ebdim7, Gbdim7 and Adim7.

All of that is to say that you can replace G7b9 (the VI chord of Bb turnaround) by four diminished 7 chords that are Bdim7, Ddim7, Fdim7 and Abdim7.

To simplify learning, the following exercises are two-bars turnarounds, in the same key. They all go to C major giving the basic progression : Cmaj7 / Am7 / Dm7 / G7 respectively I - vi - ii - V of a C.

The third I VI II V progression below is buit built with two drop 3 chords (Cmaj7 and Dmin7), one drop 2 chord (G7) and a inverted chord (Am7/C) that can be seen as Cmaj6 chord.

This turnaround variation is the backbone of what we call "Rhythm Changes", a very popular progression found in jazz taken from the George Gershwin tune "I Got Rhythm".

In comparison with the basic turnaround previously seen, you can notice that the second degree is no more minor, but dominant. In the key of C we will get a new chord (A7).

Because rhythm changes are almost always played in Bb, here are two turnaround exercises in the key of Bb. The first one implies a drop 3 voicing (Bbmaj7), a drop 2 voicing (G7) and two ninth chords that are Cmin9 (b7 in the bass) and F9.

The second turnaroud variation implies a diatonic substitution for the Imaj7 chord. As you can see in the tab below, Dm7 is played instead of BbMaj7.

Now let's replace the VI chord (G7b9) with Bdim7. As explained at the top of this lesson, they have many notes in common.

Due to the symmetry of diminshed chords, the previous Bdim7 can be replaced by Abdim7 which is actually a Bdim7 with the bb7 in the bass.

Diminished 7 chords are often used in place of the VI7 chord to make the link between the Imaj7 Chord and the iim7 chord of a turnaround.

Here we get a C#dim7 between Cmaj7 and Dm7. This creates an interesting short chromatic bass line (C - C# - D)

In the next exercise we still have a dim7 passing chord between the I and the II chord. You will notice the Db7b5 chord in the second measure, tritone substitution for the V7 chord (G7).

The particularity of this turnaround is the presence of the Dom7 chord in place of the maj7 chord. It is very used in the last two measures of jazz blues tunes. The VI7 chord is often altered with a b9 and b13.

This first example contains a G7b9 chord, a Cm11 and a tritone substitution (B7b5) for the V7 (F) chord.

The particularity of this turnaround sequence is that all the chords are dominant 7 chords. We will focus particularily on the II7 chord which has becom the secondary dominant of the V7 chord.

The two tabs below are mostly made of ninth chords which are nothing more than dominant 7 chords with an added 9.

The last turnaround of this lesson implies two secondary dominants : The III7 chord (D7) and the II7 (C7) discussed in the previous variation. As mentioned in the tab below, the basic I7 chord has been replaced by the III7 which is actullay the secondary dominant of the VI7 chord (G7).

In this pattern you can hear two tritone substitutions : D7b5 and B7#5 are played in place of G7 and F7.